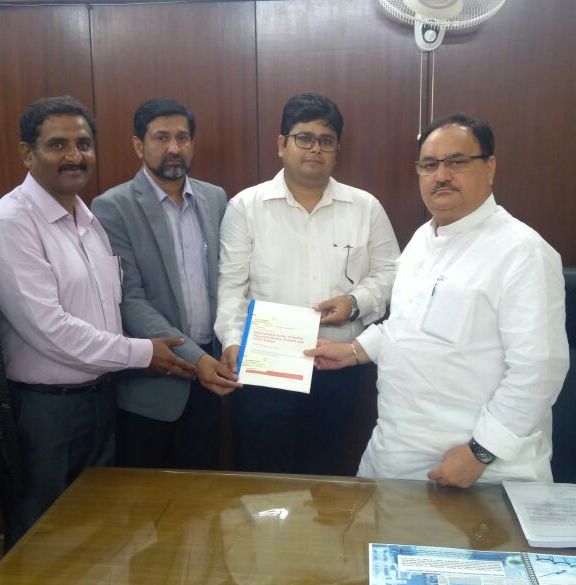 New Delhi: In the backdrop of raging controversy over the signing of diagnostic laboratory test reports, office bearers of the National MSc Medical Teachers’ Association (NMMTA), have met the Minister of Health and Family Welfare JP Nadda at Parliament and sought his intervention in setting right the anomaly.

Medical M.Sc degree holders in the subjects of Biochemistry and Microbiology have been working as consultants (Microbiologists or Biochemists) in both the private and Government diagnostic laboratories since decades. “The training imparted to the medical M.Sc students in the medical colleges, which is at par with the doctors with MD in the same subjects, have empowered them to undertake this role efficiently”, stated Mr. Arjun Maitra, Secretary of NMMTA.

Recently, in a private communication to the National Accreditation Board for Testing and Calibration Laboratories (NABL), the Medical Council of India (MCI) wrote that only persons registered with MCI/State Medical Council should sign/countersign laboratory reports. Following widespread outrage, NABL reverted to its previous guidelines of giving signatory authority to medical M.Sc degree holders. “MCI’s letter to NABL has been misconstrued as MCI’s order and is being misused to deny signatory roles to medical M.Sc Biochemists and Microbiologists. MCI has clarified that it has no jurisdiction over private hospitals, nursing homes and diagnostic laboratories, yet it takes the liberty to opine on who should sign the laboratory test reports”, said Mr. Maitra.

“The only authority to decide who should sign the laboratory reports rests with the guidelines of the state or central Clinical Establishments Acts, not MCI” opined Dr. Sridhar Rao, President of NMMTA. “Some states have their own acts and guidelines whereas some states have neither own acts nor have adopted the central act”, he added. The guidelines of the central act are still in the draft stage and the health ministry has sought public feedback on it. In its reply, NMMTA has asked medical M.Sc degree to be included in the Human Resource section for the roles of in-charge/specialists/consultants for all the three category of laboratories. In their meeting with the health minister, NMMTA requested that medical M.Sc courses should be reintroduced into the first schedule of the IMC Act and the degree holders must be registered in a council.

“An attempt is being made to wrongly project laboratory services as the practice of the medicine. The clauses in the sub-section 2 of the Section 15 of the Indian Medical Council Act, which states that only registered doctors should sign or authenticate a medical or fitness certificate or any other certificate required by any law, is being unscrupulously extended to laboratory reports” said Dr. Rao. “It is not about the signatory roles, we must be given opportunities to serve the healthcare needs of the nation. We are not here to compete, we are here to complement the doctors so that the society can be benefited”, said Mr. Maitra. Health Minister, who gave a patient hearing to the NMMTA’s representatives, assured to take it up.

A copy of memorandum was also submitted to Shri Alok Kumar, Advisor, NITI Aayog.
NMMTA is a national-level association of persons, registered at Delhi with office bearers from different parts of India and members from 26 states across India. NMMTA is a registered association of persons who have medical M.Sc postgraduate degree in Anatomy, Physiology, Biochemistry, Pharmacology or Microbiology awarded under the faculty of medicine and conducted by any medical college/institution (recognized by Medical Council of India). Aims of NMMTA is to bring medical scientists from different departments under one body ,to promote medical science by interdisciplinary exchanges , to explore research and job possibilities for members , to co-ordinate recent developments in medical science with scientific exchanges from universities, colleges and healthcare industries ,to represent the academic and employment related issues of members and to bring out scientific publications.