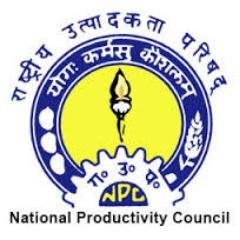 New Delhi: National Productivity Council (NPC), under Department for Promotion of Industry and Internal Trade (DPIIT), Ministry of Commerce & Industry, Govt. of India has been granted accreditation conforming to ISO 17020:2012 by National Accreditation Board for Certification Body (NABCB), Quality Council of India (QCI) for undertaking inspection and audit work in the area of Food Safety Audit and Scientific Storage of Agricultural Products. This accreditation is valid for a period of three years. NPC has already formed an Inspection Division at its Headquartersfor undertaking Inspection and audit activities.

NPC has been conducting inspections/audit for different statutory bodies such as Warehousing Development and Regulatory Authority (WDRA) and Food Safety and Standards Authority of India (FSSAI), and is already having high credentials in the area of inspections and audits.

Skill-Lync collaborates with Foundation for Excellence to…

WDRA empanelled NPC as an accreditation and inspection agency since 2011 for inspection of Warehouses all over India.FSSAI had also empanelledNPC as an Auditing agency for conducting Food Safety Audit of Food Business Operators (FBOs) across India in the area of Food Storage/Warehousing/Cold Storage. NPC has also conducted Audits of Dairy Plants, Oil Extraction Units, Solvent Extraction Plants and Oil Refineries for FSSAI.

Present accreditation of NPC by NABCB conforming to ISO 17020:2012 will enable it to undertakeIndependent Third-PartyAudits of Food Business Operators including Food Storage Warehouses as per Food Safety and Standards (Food Safety Auditing) Regulations, 2018 of FSSAI as well as inspections of Warehouses as per WDRA Rules, 2017.

Graduation for Class of Winter 2020 Advanced Management Programme in Business…

Skill-Lync collaborates with Foundation for Excellence to equip engineering students…

iednewsdesk Oct 26, 2021
There are millions of cases in which serious respiratory system illnesses place limitations on quality of life.…

University of São Paulo: Application that predicts the evolution of…

Tomsk State University: EU plans to collaborate with the TSU Center of…