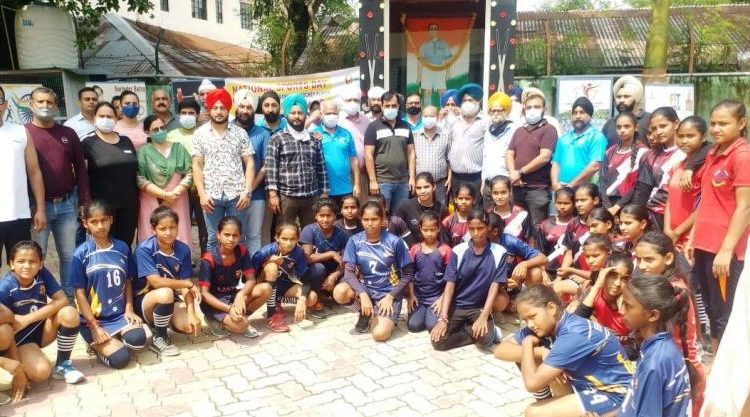 JAMMU : Floral tributes were paid to Hockey wizard Major Dhyan Chand across Jammu Division on his birth anniversary, which is also celebrated as National Sports Day across India.

The Sports Council hosted a series of sports activities including matches of Hockey & football at different venues to pay tributes to Major Dhyan Chand on his 116th Birth Anniversary.

Divisional Commissioner Jammu, in his message stressed upon to Cultivate National character & moral values among the youth and players through sports.

Dr. Zafar Iqbal, Chief Accounts Officer of J&K Sports Council was the chief guest at the function, while Rajinder Singh Kuku General Secretary Hockey India was the guest of honour. The Chief guest highlighted the importance of the sports day and advised the youth to strive for achieving their goal.

To mark the National Sports Day celebration, an impressive function was organized by Jammu and Kashmir Sports Council coaches in the memory of Hockey legend here at Sports Stadium Udhampur.

Indonesia: After 18 months of school closures, children must…

Additional Deputy Commissioner, Mohammad Syed Khan was the Chief Guest and Councillor Ward number-01 Preeti Khajuria was the Guest of honour, who is also president of District Hockey Association Udhampur. Meenakshi Sharma and Dr Jasmeet Kour were the Special Guests on the occasion.

At the outset, Manager Sports Council Udhampur, Naveen Sharma presented a welcome address and highlighted the importance of the National Sports Day.

Interacting with the players, the Chief Guest congratulated the participants on National Sports Day and threw light on the achievements of Major Dhyan Chand Singh.

The event was held under the guidance of District Youth Services and Sports Officer Kharati Lal Sharma and under the supervision of Incharge activity, Javed Iqbal Sheikh.

Harjeet Singh and Uttam Singh Physical Education Staff of Youth Services and Sports Department Reasi were the Referees of the match.

India Education Diary Bureau Admin Sep 20, 2021
Jakarta: Almost 18 months after schools in Indonesia were closed to curb the spread of COVID-19, UNICEF and the…

Dr. Mishra was the ideal and inspirational personality of the medical…