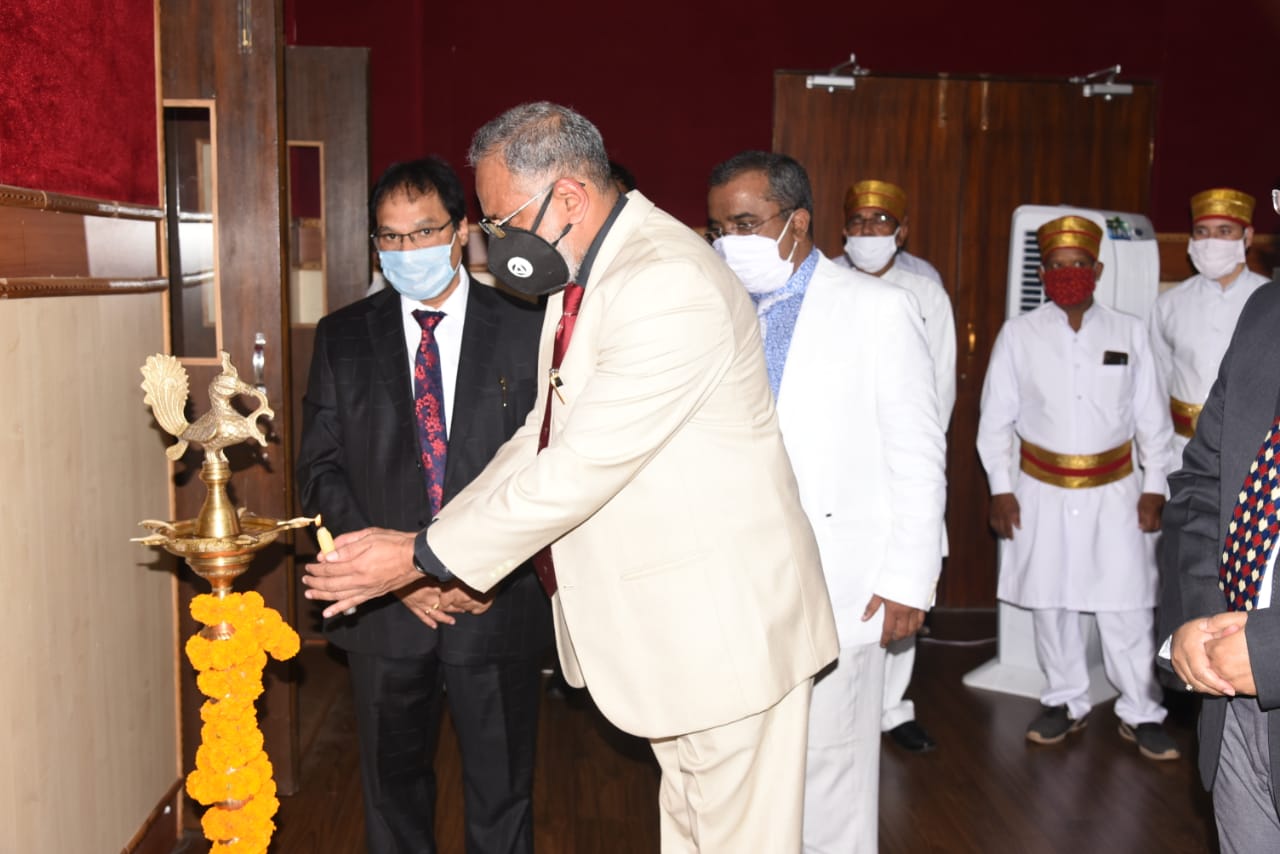 Raipur: While inaugurating the nation’s first E-Lok Adalat today, Chief Justice of Chhattisgarh Mr. PR Ramchandra Menon said that in this difficult time of pandemic, e-lok adalat is a noble initiative to bring relief to people and to reduce the pendency.
In the inaugural programme organized by Chhattisgarh State Legal Service Authority Bilaspur at the conference room of Chhattisgarh High Court, Chief Justice Menon inaugurated e-lok adalat by clicking the button. All the courts, defendants, advocates of 23 districts of the state joined this inaugural programme through video conferencing. The programme was viewed across the nation through social media platforms.
Chief Justice Menon inaugurated the programme by lighting lamp. In his address to the inaugural programme, he said that because of the lockdown due to pandemic, works of government departments as well as the judiciary system has got significantly affected. Advocates and defendants both are going through tough times. All court proceedings have been stopped due to lockdown. In this phase, we have decided to cancel summer vacation and have decided to work in weekends as well. He told that during corona crisis, more than 5212 cases have been filed. 3959 cases have been resolved in High Court. Maximum of these resolved cases were the ones for which hearing was going on for more than 5 years. Commendable work has been done In district and lower courts also, based on their capacity and infrastructure. He told that in year 2019, more than 45 thousand cases were filed in Chhattisgarh High Court alone, out of which 39 thousand cases were resolved. In year 2020, 10639 cases were filed between January and March, before the strike of corona pandemic, out of which 8736 cases have been resolved.
Justice Mr. Menon said that e-lok adalats are being held across the state, as an important opportunity. As lockdown has affected all the economic activities including judiciary sector, e-lok adalat is an initiative to reduce the problems faced by people involved in cases.
While presiding over the programme, Executive Chairman of State Legal Service Authority Justice Prashant Mishra said that it is a historical opportunity to resolve cases through mutual agreement in courts across the state through video conferencing. This is an initiative to bring justice to poor people, which would not have been possible without the support of judicial officers, advocate, law officials, and guidance of Chief Justice. He thanked Chief Justice of Supreme Court and Chairman of National Legal Service Authority for their support and guidance in establishing e-lok adalat system.
Justice Mishra said that to ensure that the e-Lok Adalat runs uninterrupted, additional data has been made available by the authority to the courts of all districts. 3133 cases are being heard in 195 benches of 23 districts in e-Lok Adalat. The High Court also has two benches available. Justice Mishra appealed to the Presiding Officers and Parties of the districts to work as much as possible to ensure settlement in as many cases as possible. He said that if e-Lok Adalat turns out to be a success, then more such e-courts will be set up in future.
The programme was addressed by Justice Manindra Mohan Shrivastava, Chairman, High Court Computerization Committee and Justice Gautam Bhaduri, Chairman, High Court Legal Services Committee. The welcome address was given by Registrar General Shri Neelam Chand Sankal. Registrar CPC Shri Shahabuddin Qureshi threw light on the concept of e-Lok Adalat.
The inauguration ceremony was attended online by Justice Gautam Charadia also joined through web link. Registrar Vigilance Mr. Deepak Kumar Tiwari, Judge of all districts, Judicial Officer, Chairman and Secretary of all District Legal Services Authority, Chairman of Bar Council, Bar Association Officer, Presiding Officer, Legal Aid Service Volunteer and Parties. State Legal Services Authority member secretary Mr. Siddharth Aggarwal proposed a vote of thanks.

A safe space to live, study and stay connected: U of T residences prepare for fall semester