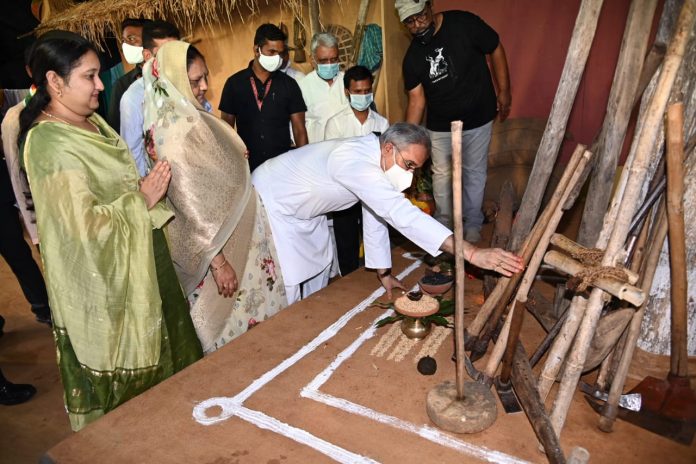 Raipur: First of its kind scheme of the country- Godhan Nyay Yojana Yojana has been commenced in Chhattisgarh today. On the occasion of the mega festival of Hareli, Chief Minister Mr. Bhupesh Baghel inaugurated the scheme by symbolically procuring cowdung. Under the scheme, government will procure cowdung at Rs 2/kg from livestock owners and use it to prepare organic fertilizers. With implementation of this scheme, major positive changes are expected in terms of environment as well as rural economy. Godhan Nyay Yojana will create employment opportunities on a large scale.

Traditionally, Hareli festival is associated with Agriculture and Environment, this is the reason why Godhan Nyay Yojana has been inaugurated on this occasion. Chief Minister inaugurated the scheme at the cultural programme organized at his Raipur based residence. Implementation of Suraaji Gaon Yojana has been started in villages of the state already, under which construction of more than five thousand cowsheds has been constructed. Out of these, construction of 2785 cowsheds has been completed, and remaining are being constructed at a fast pace. Godhan Nyay Yojana will be implemented through these cowsheds only. Cowsheds (Gauthans) are being developed as day care center for cattle. Women Self-Help Groups are conducted various income-oriented schemes here including the preparation of vermin compost. State Government has set the target of expanding the scheme across the state by building cowsheds in all 11630 gram panchayats and all 20 thousand villages in phases.

Chief Minister Mr. Bhupesh Baghel commenced the scheme by worshipping the livestock and agricultural equipment, with his wife Mrs. Mukteshwari Baghel and other family members. On the occasion, Chief Minister extended greetings of the first ever festival of the new year to people of the state and said that this scheme will prove to be a boon for farms and cattle ranchers and an elixir for the rural economy, in this time of crisis. Mr. Baghel said that Godhan Nyay Yojana will not only help the cattle ranchers to earn extra income, but will also end the problem of open grazing of cattle. The scheme will encourage use of organic fertilizers, minimizing the use of chemical ones. As protection of kharif and rabi crops will be ensured, bi-crop area will expand. Fertility of soil will improve and availability of chemical free fertilizers will improve, which will further enhance nutrition-level of crops as well. Gauthan Samitis will procure cowdung from farmers and cattle ranchers at Rs 2/kg, and women self-help groups will prepare vermin compost using the cowdung procured. Vermi-compost so produced will be sold at the rate of Rs 8 per kg. Cowdung procured will also be utilized for manufacturing other products.
Narva Garva Ghurva and Bari programme is already being conducted under Suraaji Gaon Yojana, launched by state government to revive rural economy. Godhan Nyay Yojana is connected with the Garva, Ghurva and Bari aspects of the programme. Recently, Rajiv Gandhi Kisaan Nyay Yojana has been started to ensure that the farmers get fair value of their crops. Under this scheme, Rs 5750 crore is being directly transferred to the accounts of farmers as exchange grant. First installment of this amount i.e. Rs 1500 crore was transferred into the accounts of farmers on the day of inauguration of the scheme itself. Second installment under the scheme will be released in August month.
In the inaugural programme at CM House, Agriculture and Water Resource Minister Mr. Ravindra Choubey, Urban Administration Minister Dr Shivkumar Daharia, Food and Culture Minister Mr. Amarjeet Bhagat, Parliamentary Secretary Mr. Vikas Upadhyay, Chhattisgarh Housing Board Chairman Mr. Kuldeep Singh Juneja, State Women Commission Chairman Mrs. Kiranmayee Nayak, Speaker Raipur Municipal Corporation Mr. Pramod Dubey, Khadi and Gramodyog Board Chairman Mr. Rajendra Tiwari, Food Civil Supply Corporation Chairman Mr. Ramgopal Agrawal, Advisor Duo to Chief Minister Mr. Vinod Verma and Mr. Pradeep Sharma, Chief Secretary Mr. RP Mandal, Additional Chief Secretary to Chief Minister Mr. Subrat Sahu, Principal Secretary of Forest Department Mr. Manoj Pingua, Commissioner of Agriculture Production Dr. M. Geeta, Secretary to Chief Minister Mr. Siddharth Komal Singh Pardeshi, Principal Chief Conservator of Forests Mr. Rakesh Chaturvedi and many public representatives and prominent citizens were present. Chief Minister performed Hareli Puja his wife Mrs. Mukteshwari Baghel.
State government ministers, parliamentary secretaries, presidents of authorities, panchayati raj institutions and public representatives of urban bodies participated in programs organized in various districts for the launch of the Godhan Nyaya Yojana.
To celebrate the traditional Hareli festival of Chhattisgarh, a part of Chief Minister’s residence was decorated on rural theme today. A tableau was displayed at the Chief Minister’s residence portraying the way the puja is performed in the village houses. The tableau of the village houses and fences were prepared using dung and mud. The tableau also had models of gauthan, Gada baila and many items including the use of farmers, tools, nangar, gaiti, rapa, kudali, bansula on display.
Chief Minister Mr. Bhupesh Baghel worshiped tools and fed cows. A replica of Gauthan has also been made at the Chief Minister’s residence. He inaugurated the Godhan Nyaya Yojana at Gauthan built at Chief Minister’s residence. Scales and grazing have been arranged for dung weighing. Nangar, Kopar, Supa, Parra, Kandil, Khumri, Dori, Machi, Pidhwa, Jata, Paddy Sack, Gedi, Bahri, Racher, Handi, Maraki, Bana, Humahi, Gaad Chakka, Chhena ,etc were also put on display as a part of decoration. The village deity and Tulsi Chara were placed at the place of worship.

Rahchul and gedi performed at the cultural programme

Chief Minister Mr. Bhupesh Baghel along with his family enjoyed Rahchul (Rahchuli) performance at the cultural programme held at his residence on the occasion of Hareli. He also climbed the Gedi and performed various traditional rituals of the festival.

At the Hareli special programme organized in CM House today, Folk artists, folk dancers, folk singers of Chhattisgarh gave performances in traditional costumes with musical instruments and decorations. Bamboo songs (Baans Geet) were also performed at the programme. Bamboo song artists were specially invited from Gariaband district. Baans Geet were performed by Latti Yadav and fellow artist. According to the tradition of Chhattisgarh, on Hareli festival, the cattle of the house are fed with londi along with herbs to keep the cow and the bull healthy. bhajiya and gurh chile are specially prepared in houses on Hareli day. On this day, people of the Yadav community roam around the village and put neem leaves in the houses to protect people from diseases. People of blacksmith society make various kinds of agricultural machines. According to the needs of the village, the instruments used in agriculture are made by them. In accordance with the folk and social tradition, the people of blacksmith society put nails in the houses to protect them from evil.

NTA CUET-UG scheduled for today postponed, to be held between 12th...