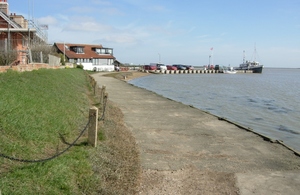 Proposals for improved public access to a 39-mile (62km) stretch of coast between Bawdsey and Aldeburgh have been unveiled today, Wednesday 3 February 2021, by Natural England.

When established, this fifth and final stretch of the path will complete a 138-mile (222km) coastal route along the Suffolk coast. It will run from the Essex/Suffolk border near Manningtree to the Suffolk/Norfolk border at Hopton-on-Sea. Extending around the Alde and Ore estuary, it includes 3 rivers: the Ore, Butley and Alde.

There is now a period of 8 weeks for the public to have their say on the England Coast Path proposals. If approved, this route will become part of the England Coast Path – the 2,700 mile long distance walking route and England’s newest National Trail currently being developed around the entire English coast by Natural England.

The estuaries in southern Suffolk define the character of this part of the county, and the proposed route sits entirely within the Suffolk Coast and Heaths Area of Outstanding Natural Beauty. It is also an important area for wildlife.

This stretch of the England Coast Path uses parts of the existing Suffolk Coast Path, and starts at the mouth of the northern side of the Deben.

Along the way it takes in Bawdsey’s military history and Shingle Street, then goes around the Butley River estuary with views of Orford Ness. A few miles on, it passes Snape Maltings, then across the marshes in to Aldeburgh.

From cliffs to grassed banks, this stretch has some interesting sites in view. These include the Radar Museum and Martello Towers at Bawdsey, Orford Castle and the old military buildings on Orford Ness. Snape Maltings is also an internationally famous venue for music and the performing arts.

We have had discussions with landowners and key organisations along the proposed route. Their input has been essential and helped shape the proposals. We thank everyone for their time and input so far.

Over the next 8 weeks, we are inviting all organisations, farmers, local residents, visitors and businesses to have their say. It’s important that all responses are taken into account and we look forward to hearing people’s views.

I am very pleased that Natural England is publishing the final report, which is the last piece to reveal the route that the England Coastal Path will take in Suffolk.

Excursion to the Petrozavodsk branch of JSC…

This is a very exciting time for all those who love the Suffolk coastline and enjoy the peace and solitude it provides. We very much look forward to continuing to work with Natural England and launching Suffolk’s first fully fledged national trail.

Anyone may make representations to Natural England about the reports during the 8 week period. Owners and occupiers of affected land may make objections about the reports on specified grounds, which will be considered by a Planning Inspector before the Secretary of State makes a final decision.

All representations and objections must be received by Natural England no later than midnight on 31 March 2021. The full reports, and all the forms and guidance on how to make a representation or objection within the next 8 weeks, are also available on GOV.UK.

England Coast Path
The Marine and Coastal Access Act 2009 places a duty on the Secretary of State and Natural England to secure a long distance walking trail around the open coast of England, together with public access rights to a wider area of land along the way for people to enjoy.

A map shows a timetable for the work.
The England Coast Path will be our longest, newest and most challenging National Trail, passing through some of our finest countryside and coastal locations.
It will secure legal rights of public access for the first time to typical coastal land including foreshore, beaches, dunes and cliffs.
As well as recommending new sections of route, the proposals outline improvements to existing access to the coastline, with proposals:

To identify a clear and continuous way-marked walking route along this part of the coast, bringing some sections of the existing coastal footpath closer to the sea and linking some places together for the first time.
To allow the route to ‘roll back’ if the coastline erodes or slips, solving the long-standing difficulties of maintaining a continuous route along the coast.
Further information – Bawdsey to Aldeburgh coast path
The Radar Museum helps explain Bawdsey’s key role in developing radar technology. The cliffs soon give way to the grassed banks that protect much of this coast from the sea. Three Martello towers along this stretch defended the coast from a different threat.

The remote hamlet of Shingle Street was once the home of river pilots. Here the route leaves the open coast to continue alongside the rivers that partly flow parallel to the sea because of Orford Ness.

A route around the Butley River has been proposed but the part-time ferry has been operating for hundreds of years and now relies on volunteers to row people across the river.

Along this stretch there will be glimpses of the strange buildings on Orford Ness that show its military history. All is quiet now and the National Trust is custodian of the area that is a National Nature Reserve, with boat trips from Orford. One of England’s most complete keeps at Orford Castle gives good views across to Orford Ness.

Walk a few miles further and the trail passes Snape Maltings that has become an internationally famous venue for music and the performing arts. As well as the concert hall, the Maltings offers shops, places to eat and boat trips along the River Alde.

On the northern bank the route partly follows the Sailors’ Path, traditionally a route between Snape and Aldeburgh. The path now crosses Aldeburgh Marshes and gives one last chance to walk alongside the river and see the boats and sailing clubs. There’s one last view south to Orford Ness and the final Martello Tower before discovering the delights of Aldeburgh.

Excursion to the Petrozavodsk branch of JSC “AEM-technologies”

Three programs of PetrSU have passed professional and public accreditation

Workshop to promote cultivation of medicinal, aromatic plants held at…