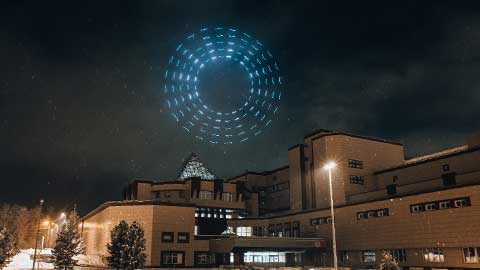 NAUKA 0+: from MSU to SibFU

The festival started in at Lomonosov Moscow State University. In the past several months, 8 Russian cities became central regional venues of the festival, which over 15 million people visited. The results of this scientific marathon were summed up in the centre of Eastern Siberia, at Siberian Federal University.

“This year has demonstrated the exceptional importance of fundamental and applied research, showed the ultimate role of the profession of a scientist and sparkled interested in science in the widest audience in the world,” said Valery Falkov, minister of Science and Higher Education, chairman of the Science Festival Organizing Committee. “The All-Russian Science Festival NAUKA 0+, which for 15 years has been successfully carrying out its educational mission in Russia and abroad, has expanded the formats this year and doubled the capacity in order to respond to the multiplied demand of society for the popular science agenda.”

At the festival in Krasnoyarsk, all the online platforms opened by the organizers earlier continued to work, but Siberians enjoyed the fullest possible content of the hypermuseum and virtual laboratory. Krasnoyarsk unique content also appeared. So, the key event of the final of the festival was the Политех#Делайснами — 2020 makerton. The SibFU scientists and partners delivered a series of educational lectures and master classes for schoolchildren from forms 9–11 and where they told about the creation of their own smart city farm for growing plants. But this engineering and scientific marathon is not limited to only two festival days: the result of the work by young researchers — a strawberry harvest — will follow only in February 2021.

The fact that the festival was held in Krasnoyarsk did not at all mean that it was only for Krasnoyarsk residents. Proof of this is the scientific and entertainment program QUIZ#МАГНЕТИЗМ, where 47 teams from all over Russia participated. Questions were about the technologies of the future in energy, biology, IT, artificial intelligence, nanoparticles and other areas of physics. Which, in fact, is no wonder, since the main motive of the anniversary festival of science was “Physics of the Future”.

Over these years, the NAUKA 0+ festival has proved to be a family festival. There is room for both eminent scientists and the youngest. SibFU’s special project titled “Read Science” has united them both — honoured scholars read children books, the heroes of which were children too and they were lucky to meet wise adults in their lives. And then they grew up and made a discovery. The evening lecture hall #почитайнауку (read science) is still available on the festival website.

The drone show was supposed to become a special event of the festival, but the organizers did not dare to announce it until recently, for the weather, which was unprecedentedly warm for Siberia at this time, suddenly dropped to -20 degrees. But everything turned out as it should, and 150 drones flawlessly performed all six UAV-maneuvers of aerobatics. Previously, GEOSKAN company held a series of masterclasses for the participants of the festival.

Maksim Rumiantsev, rector of Siberian Federal University: “It seemed that this year, such events were impossible as everyone is focused on anti-pandemic measures. But, deciding to participate, all — the administration of Krasnoyarsk Territory, the management of SibFU, and the festival partners — understood that people had started to love the festival, they had been waiting for it, they had been preparing for it. Over the years, it has gained a reputation as an intellectual celebration to be attended by the whole family.

For the past five years (this is how long the festival has been held in Krasnoyarsk), the number of participants has doubled, and the number of visitors has grown from 15 to 50 thousand people. And the university itself has turned into a central regional platform. This year the 15th NAUKA 0+ Festival broke records. Krasnoyarsk, I hope, became a grand finale to this scientific and educational marathon.

One of the most ambitious projects in the field of popularizing science in Russia is finished, but that’s not the end of the story! A significant portion of the events continues to live online: lectures by famous scientists, discussions about the future of physics and all mankind, unique scientific and educational films, creative workshops and an interactive exhibition.”

En+ Group became the general partner of the central regional site of the Science Festival in Krasnoyarsk.

“Science is the main tool of humanity for confronting global challenges. This became especially well understood in this extraordinary year. For many years, En+ has been actively supporting young innovators and experienced scientists who are looking for answers to the most complex theoretical issues and creating outstanding applied technologies of the future,” said Vladimir Kiryukhin, CEO of En+ Group.