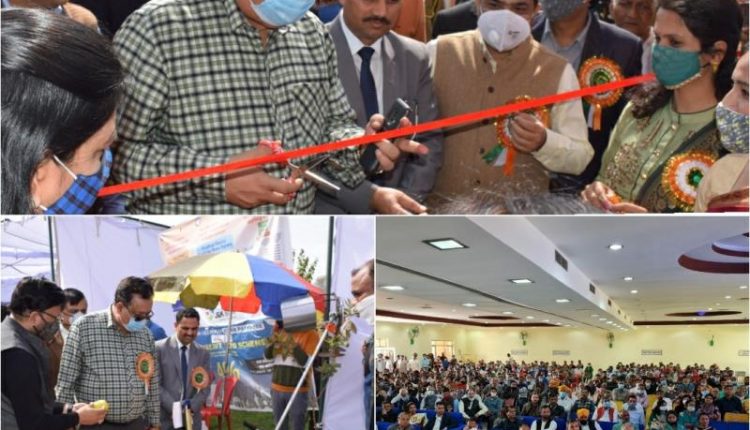 Navin Kumar along with other dignitaries inspected different stalls of agriculture and allied sectors like Horticulture, Animal Husbandry, Sericulture, Fisheries and KVK besides stalls of private players dealing with agriculture inputs, farm machinery and organic products were also installed during the event. The stalls displayed and highlighted various farmers’ welfare schemes and programmes.

Navin Kumar Choudhary exhorted upon the farmers to take advantage of plethora of schemes under Atam Nirbhar Bharat, CSS and CAPEX for diversified modern scientific farming. He said adopting methods like integrated farming will surely pave the way for doubling income of the farmers. Efforts are being made to develop agriculture as highly lucrative business by ensuring emphasis on value addition and packaging, he added.

Principal Secretary said that Kathua has been declared as a Spices District under “One District One Product” (ODOP) to give fillip to Spices Cultivation in the district. He appealed the youth to explore employment opportunities in the field of spice cultivation and its marketing for which department will extend all help and expertise. Efforts are also being made to develop Kathua as Organic District in the coming two years, he added.

Referring to recent initiatives taken up by the department, Navin Kumar said the subsidy and incentive part of several schemes of Animal Husbandry, Sheep Husbandry, Sericulture, Horticulture and allied departments has been increased and simplified to encourage the farmers to install agro based units and provide employment opportunities to others. He said machinery banks and CHCs are also being established to increase power availability to the farmers besides machinery like Combine Machines are also being provided to the farmers in addition to Tractors and Threshers at panchyat level.

Regarding irrigation resources in kandi areas, he said the Ujj Barrage and Shahpur Kandi Project once completed will change the irrigation scenario of Kandi belt of Kathua district. He informed that a comprehensive plan is being worked out to explore the possibility of irrigation through deep bore wells in kandi areas. He directed department heads to organise such types of exhibitions in a collaborative manner involving agriculture and allied departments in each block on regular basis.

DDC Chairman Colonel Mahan Singh said such events should also be organized in far flung areas of Bani, Billawar and Basholi for awareness of farmers regarding various schemes.

Vice Chairman DDC, Raghu Nandan Singh said that the elected representatives will work as a medium between the public and the departments for development of the country.

The main attraction of the mela was solar power fencing and Agri Cannon which is used for scaring monkeys to prevent huge crop losses. Besides, women self help groups of agriculture also showcased products like pickles and canned vegetables.

Earlier, the head of agriculture and allied departments educated the farmers about the schemes and programmes of their respective departments.