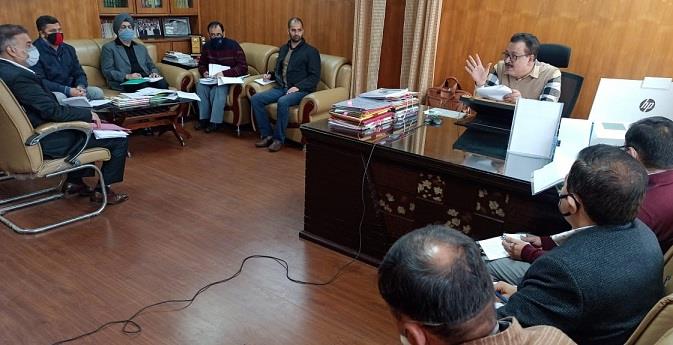 Meanwhile, Director Horticulture, Kashmir, Aijaz Ahmad Bhat and other officers of Agriculture and Horticulture departments participated in the meeting through video conferencing from Srinagar.

Principal Secretary asked the officers to be cognizant of the needs of areas as per their topography and major crops of cultivation. He directed them that the funds available under different central schemes should be used in such a way that they compliment each other.

Navin further asked the officers to utilise the resources available with them under these schemes effectively so that the scenario of agriculture changes for better. He asked them to provide the tools/machinery to farmers that lessens their labour costs and yields better produce for them.

Principal Secretary also asked them to prepare the annual action plan under the Paramparagat Krishi Vikas Yojana (PKVY) as per the prescribed format for submission to the concerned.

Principal Secretary asked the officers to complete all the requisite formalities for flagship scheme Pradhan Mantri Fasal Bima Yojana (PMFBY) asking them to conclude the process for all the districts of J&K and include all the major crops cultivated there.

Navin asked the officers to submit the progress achieved so far under different CSSs besides highlighting their future plans.

Principal Secretary was informed about the details and progress achieved under Rashtriya Krishi Vikas Yojana (RKVY) scheme from 2009-10 till March, 2020. He was also apprised of the status of Sub-Mission on Agriculture Mechanization.

Modalities for COVID– 19 Vaccination discussed;Phase I to cover all Health workers: Director FWMCH&I