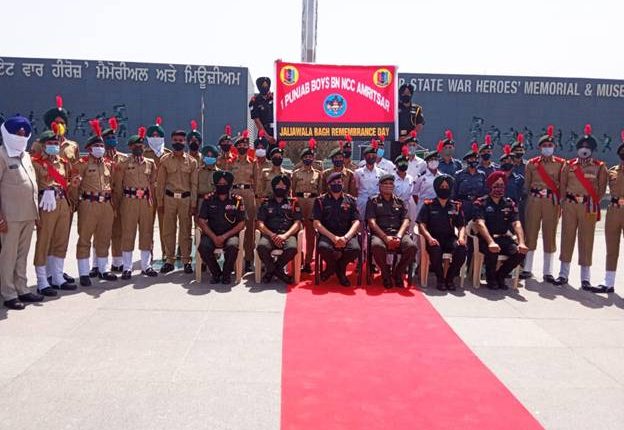 New Delhi: National Cadet Corps (NCC) today paid homage to the martyrs of Jallianwala Bagh massacre who lost their lives on this day, i.e., April 13 in 1919. The homage coincides with the ongoing ‘Azadi ka Amrit Mahotsav’ wherein the nation is celebrating the 75th Anniversary of Independence.

The cadets of NCC, which has a strong cadet base of 14 lakhs, gathered at 75 places across the country paying gratitude to the freedom fighters through Nukkad Nataks, patriotic songs, speeches and skits. This tribute by the cadets filled the environment with patriotic fervour with many locals also joining the events. The social media was also flooded with #NCCremembersJallianwala.

On the occasion, the NCC also launched a pan-India campaign to educate people against ‘Single use Plastics’. The cadets gathered at these 75 locations after conducting Plog Runs and spreading the message of cleanliness and putting an end to ‘Single use Plastic’. The message was spread on social media through #NCCagainstPlastic.

The NCC, a premier uniformed youth organisation of the country, has contributed significantly in nation building since its inception. It has transformed the lives of millions of youth by shaping their character and showing them the path of ‘Unity and Discipline’. The corps has made praiseworthy contributions in spreading awareness amongst the masses on important issues like water conservation, environment protection, digital awareness and Swachhta Abhiyan.