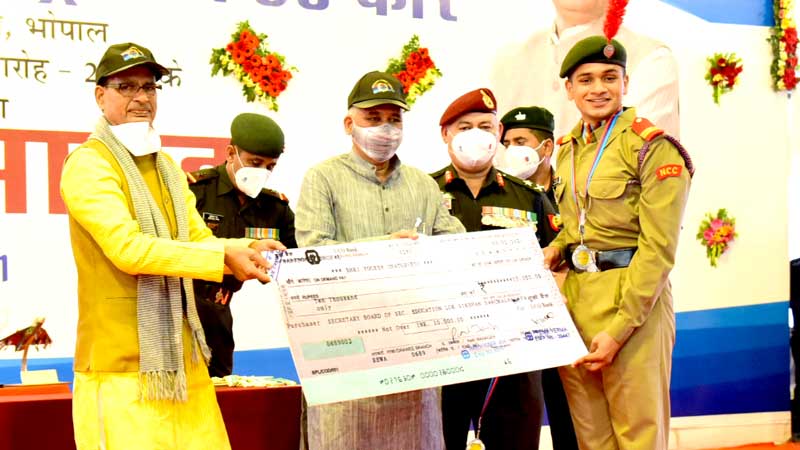 NCC will be expanded in schools and colleges of the state: CM Chouhan

Bhopal : Chief Minister Shri Shivraj Singh Chouhan has said that the National Cadet Corps is a powerful medium for developing patriotism, values, hard work, honesty, devotion, determination towards goal and discipline among the youth. It will be expanded in maximum number of schools and colleges in the state. Chief Minister Shri Chouhan said that drug abuse is making today’s youth weak. The National Cadet Corps (NCC) and National Service Scheme (NSS) must include anti-addiction campaign in their activities. Chief Minister Shri Chouhan was addressing the felicitation ceremony of NCC cadets and NSS students representing Madhya Pradesh and Chhattisgarh in the Republic Day celebrations at New Delhi on Thursday, at his residence. Minister of School Education (Independent Charge) Shri Inder Singh Parmar was also present on the occasion.

The second edition of Global Bio-India to be organised from…

One lakh 14 thousand youth of the state in NCC

Major General of NCC Shri Sanjay Sharma said that the contingent of the Republic Day Parade held every year at the national level in Delhi, participates in various competitions and cultural events during the month-long camp and records achievements. Cadets from Madhya Pradesh and Chhattisgarh who participated in the glorious Republic Day Camp were honoured. Shri Sharma informed that NCC activities are conducted in 52 districts of Madhya Pradesh and 28 districts of Chhattisgarh. About one lakh 14 thousand youth are participating in NCC in 400 schools and 900 colleges of Madhya Pradesh, out of which 30 percent are girls. Similarly, about 1 lakh 50 thousand NSS students are active in Beti Bachao, blood donation, rural development, sanitation and other public welfare activities in Madhya Pradesh. Shri Sharma also informed about the activities conducted by NCC cadets and NSS participants to help people in the difficult circumstances during the Corona period. Teachers and students were present in the programme.