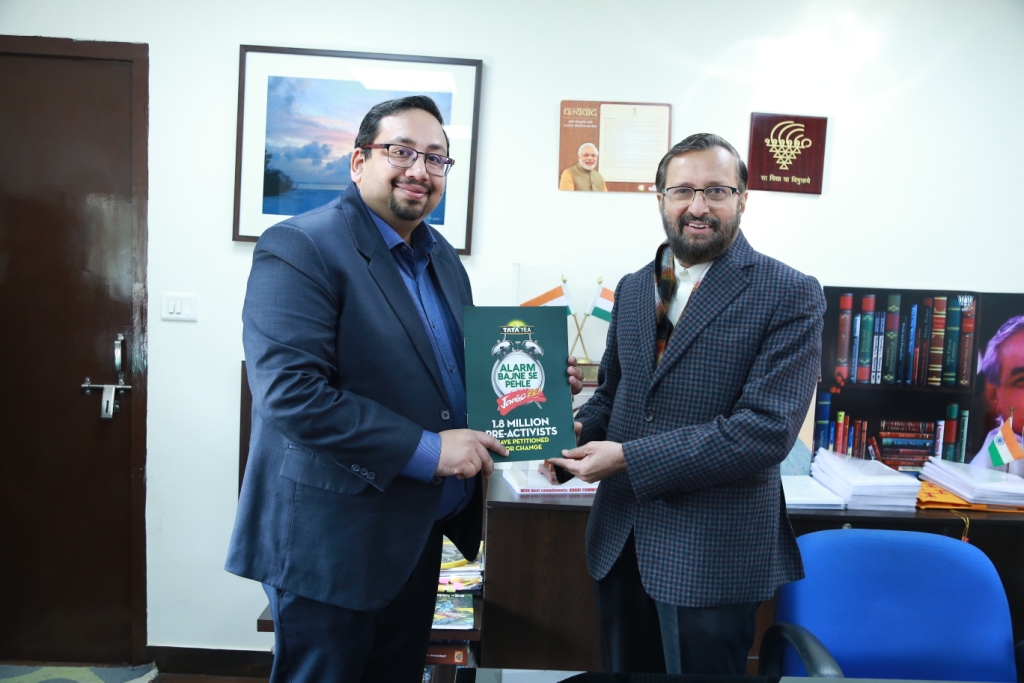 With nearly 1.8 million signatures, Tata Tea Jaago Re 2.0 petitions handed over to the Ministry of HRD – Government of India

New Delhi: Today, Tata Tea Jaago Re presented Shri Prakash Javadekar, Ministry of Human Resource Development, Government of India, petitions with close to 1.8 million signatures collected from across India that hope to instil positive change in the areas of women’s safety and lack of sports culture in the country.

Jaago Re 2.0 launched earlier this year with the theme ‘Alarm Bajne se Pehle Jaago Re’, urged people to ‘pre-act’ on issues to avert a future crisis. Jaago Re’s two petitions which aim to make gender sensitisation compulsory in a school curriculum, and make sports a compulsory subject in schools garnered support from nearly 1.8 million people across the nation in just a few months. The petitions were presented by Mr. Puneet Das, Marketing Head, Tata Global Beverages.

Receiving the petition, Shri Prakash Javadekar, Ministry of Human Resource Development, Government of India stated, “We are glad that the Tata Tea Jaago Re team has brought out this petition to make sports compulsory and also include gender sensitization as a part of the curriculum in schools across the country. This is a welcome step and we believe that schools and colleges should dedicate one hour to sports or physical activity. I urge all teachers to promote gender sensitization in their respective institutions and introduce several training modules for teachers to help them impart the message of Gender Sensitization efficiently to their students. I strongly believe education is a societal action, and everyone including schools, parents and teachers should contribute towards creating awareness about the importance of physical activity and gender sensitization.”
He further added, “As part of the flagship scheme Sarva Shiksha Abhiyan (SSA), we have a web portal called ShaGun that aims to capture and showcase innovations and progress in elementary education sector of India. I would like to make this announcement here today that we will add a window for Gender Sensitization to this portal as it will go a long way in promoting and monitoring this initiative.”
Thanking the Government of India, Mr. Sushant Dash, Regional President – India & Middle East, Tata Global Beverages, said, “Jaago Re 2.0 has gone beyond and transformed into a people’s movement. The fact that both the petitions together crossed the goal of 1 million signatures in less than three months is a testament of people’s belief in our endeavour. I would like to take this opportunity to thank Hon’ble Minister, Shri Prakash Javadekar for accepting the petitions, and also the millions of people who believed in the campaign and pledged to pre-act in their personal life. We hope that with the help of the Government and the overwhelming response of the people, we will be able create a better and safer society for our children.”

Speaking at the occasion, Mr. Puneet Das, Marketing Head, Tata Global Beverages, said, “We have received a phenomenal response to our on ground campaigns around gender sensitisation and sports – with around 1.8 million signatures. With this handoff of the petitions to the Ministry of Human Resource Development, the campaign has reached its goal of informing, educating and encouraging the society to pre-act.”
Nationally, the petition to include gender sensitisation programs in schools found support from 55% men and 45% women. Commenting on the response to the petitions Mr. Dash, added, “It is heartening to see the overwhelming support from men who also understand the urgent need to create an equal and safe environment for women to grow and thrive in.”

Jaago Re 2.0 hopes that its petitions to the Government will be the first step towards building public and stakeholder opinion, consensus and consequently drive relevant policy action towards an actionable roadmap to make this vision a reality.