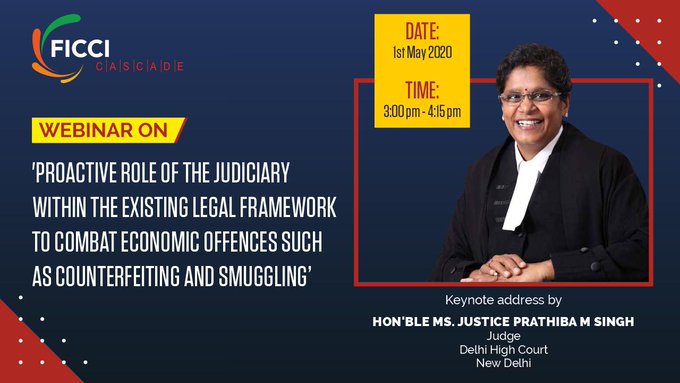 New Delhi: Ms Justice Prathiba M Singh, Judge, Delhi High Court, yesterday said that it is imperative to have a coordination agency at the national level to reduce the economic crimes.

Addressing a webinar on ‘Proactive Role of Judiciary within the legal framework to combat economic offences such as counterfeiting and smuggling’, organized by FICCI CASCADE, Justice Prathiba Singh said, “A way to address the menace of economic crimes could be a coordination agency at national level which could also include cybercrime and online counterfeiting. This would also assist in data management and dissemination to ground level.”

Mr Anil Rajput, Chairman, FICCI CASCADE said that counterfeiting, smuggling and piracy have emerged as the likely sources for financing of international terrorist organizations, non-state sponsored terrorist organizations and domestic terrorist groups. “Judiciary has to play a more proactive role in combating this menace so that the people who indulge in these unscrupulous activities will get stringent punishment,” he added.

BYJU’S And The Akshaya Patra Foundation Join Forces To…

Through this initiative FICCI CASCADE sensitized over 100 students of law of reputed law schools and several legal practitioners across India on issues and challenges in resolving disputes in view of the rising cases of economic crimes such as counterfeiting and smuggling, IP infringement, the changing scenario of technology, trade policies and the development of the law on the subject.

FICCI CASCADE closely works with government, industry, enforcement officials, legal fraternity, consumer organizations and the youth to create awareness on the adverse impact of such crimes i.e. on safety and security of the people, loss of revenue to right holders and tax-revenues to the government exchequer. FICCI CASCADE earlier this year has made recommendations to the PMO (Prime Minister’s Office) and Ministry of Law and Justice, GoI on curbing Illicit Trade. Some of the key suggestions included:

Economic offences such as counterfeiting and smuggling to be considered as a criminal offence under IPC.
In cases of such offences, bail to be granted on execution of exorbitant security.
For repeat offenders, the offence should be made non-bailable.
Imprisonment should be more rigorous than at present.
Stringent monetary penalty for the offences
Expeditious investigating of cases and ensuring prosecution in a time bound manner
Capacity building by judiciary for commercial courts

On the occasion of centenary year of great archaeologist Prof B. B. Lal, Union Culture Minister releases e-book “Prof. B. B. Lal -India Rediscovered” today in New Delhi