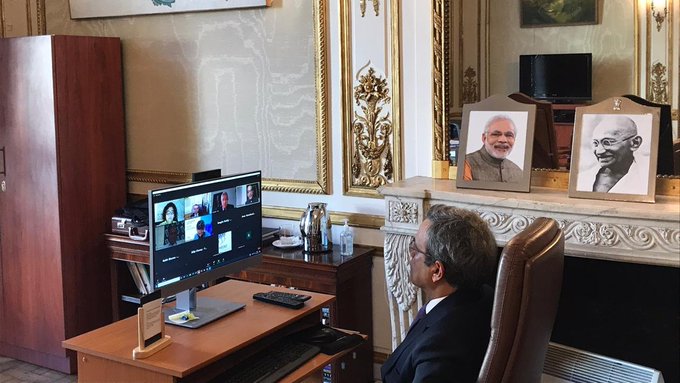 New Delhi: Mr Jawed Ashraf, Ambassador of India to France today said that the strategic relationship between India and France is growing rapidly and the bilateral cooperation has touched across every field of national endeavour, including the defence and security sector. It is now evolving from its bilateral context to a regional and multilateral context. “Due to the current pandemic, the role of India-France strategic partnership for a stable and secure Indo-Pacific region in a multipolar world order anchored in multilateralism has grown even stronger,” he added.

Addressing the virtual session on France-India Business Forum: Moving Beyond COVID Pandemic, organized by FICCI and the Mouvement des Entreprises de France (MEDEF) International, Mr Ashraf said that for a much stronger economic partnership, we must use this crisis as an opportunity to accelerate the process of economic engagements across sectors of mutual interest between India and France. “There is great opportunity for nations to reinforce the economic momentum and recovery. The reforms launched in India are structural in nature and not cosmetic. Defence manufacturing will be an area of great opportunity,” he added.

Mr Ashraf further stated that we must make the economic partnership a key element not just to bring prosperity in both countries but as an important instrument of our strategic vision. “We need to have a much higher level of bilateral engagement, both at the government and industry level,” he added.

“Various sectors already have a strong presence of French companies in India,” noted Mr Ashraf. He further added that the government remained committed to remove the bottlenecks to attract more French investments to India.

Microsoft and the Museum of Art & Photography (MAP),…

He further stated that the geopolitics has started to influence the economic choices and trust has become an important factor. Strategies for diversification of supply chain that involve resilience will now be seen. “Trust and resilience are two important elements in the India-France strategic partnership. Technology will become an instrument of sovereignty of power, competitiveness in future and there will be great opportunities in this sector for both countries,” added Mr Ashraf.

Dr Sangita Reddy, President, FICCI said, “Being faced with an unparalleled situation due to the COVID-19 outbreak, the world is scouring to re-invent and rediscover the economic fabric that would weave a new future for the global economic order. India and France are ideally primed to further deepen the economic, technical and investment ties across sectors in the backdrop of ever-evolving geo-economic global scenario.”

Mr Geoffroy Roux De Bezieux, President, MEDEF said that we must take steps now to focus on the future. “India will certainly be one of the main partners in coming years. We have around 500 French companies who have invested in sectors like defence, energy, smart cities, manufacturing, cement. We can certainly do more to increase the trade between India and France,” he added.

University of Reading: The secret lives of mites in the skin of our faces

iednewsdesk Jun 22, 2022
Microscopic mites that live in human pores and mate on our faces at night are becoming such simplified organisms…

University of Exeter: Inspiring diversity and refugee campaigners and…

University of Exeter: Breakthrough in quest to control light to evolve…

University of Edinburgh: Scholarship launched for students impacted by…