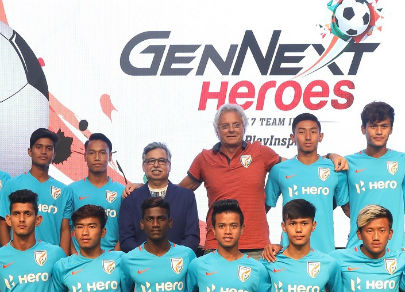 Mumbai: Outlining the key initiatives required to nurture the country’s young football talent and make India a globally competitive footballing nation, Pawan Munjaltoday said he is confident that “it is a matter of just a few years before football will be the chosen sport for millions of Indians.”

Commenting on the measures needed to take Indian football to its next level, Munjal said “There is a need to develop playgrounds with good quality grass cover so that our budding players are not afraid of making diving tackles for the fear of picking up injuries. Then we need better sports medicine specialists attached to the teams so that the injuries are treated expeditiously and appropriately. We also need to train and groom referees at the grassroots so that they gain enough confidence to officiate at the highest level without getting intimidated.”

“These three measures will certainly go a long way in instilling a lot of confidence in our young players and preparing them for the intensely competitive big leagues at the global level,” Munjal – the Chairman, MD & CEO of Hero MotoCorp, the world’s largest two-wheeler manufacturer and one of the biggest corporate supporters of football in India, said.

Munjalalso called for a more collaborative effort between the private sector and the government bodies to create the right kind of infrastructure for the growth of football in the country. He added, “The efforts of the corporates need the government’s support for their initiatives to succeed. This can be in the form of developingmore playgrounds and stadiums and all other necessary infrastructural facilities.”

Sharing his views ahead of the Final of the Hero Indian Super League that is scheduled on March 17, 2018 in Bengaluru, Munjal said “In just five years, the Hero ISL has inspired millions of youngsters across the country to take up the sport. Football has made huge strides in the past five years, not just in the traditional bastions of Kerala, West Bengal and Goa, but also in other parts of the country. Over the past 10 years, north-eastern states such as Meghalaya and Manipur have made immense progress, and young footballers from these states are today making their mark at the national level.”

“The players are ready and the resources are available. The only thing that is required is consistent commitment on the part of administrators, state associations, clubs and coaches to give their best for the game,” Munjal said.

“On our part as long-term supporters, we are committed to continuing to contribute towards the creation of a sporting culture in the country, and we are convinced that football has huge potential to be a positive influencer for the youth. We are determined to play the role of a catalyst – a change agent – in bringing about a complete transformation in the ‘culture’ of football in India,” Munjal said.

“If we collectively put our hearts to it, it is a matter of just a few years before football will be the chosen sport for millions of Indians. Simultaneously, the immense talent that lies latent within the country will begin to express itself on the world stage,” he added.