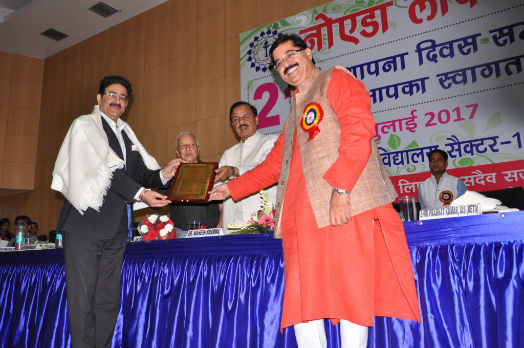 “There is a need to imbibe willingness amongst people to help each other in cities” avers Dr. Mahesh Sharma

Noida Lok Manch (NLM) is a registered non-profitable, charitable NGO Society established in 1997 as a people’s initiative. The activities of NLM have a wide ambit ranging from education to the under-privileged to helping victims of the natural disasters in India and its neighboring countries.

Addressing the gathering, including Dr. Mahesh Sharma, Union Minister of State for Tourism & Culture (Independent Charge), Government of India commended Noida Lok Manch for its participation of thousands of erudite intellectuals who believe in contributing towards nation building through service to humanity. He averred that it is admirable and an achievement in itself for an organization to work dedicatedly towards helping people for over two decades. He emphasized that there is a lack of sensibility to reach out and help others in cities, hence there is a need for NGOs to address a wide range of social needs in the vicinity.

Dr. Sharma lauded the hard work of Noida city youth who with their remarkable achievements have made the city as well as the nation proud. He pointed out that with futuristic growth over the decades, Noida, as a city and integral part of NCR, stands testimony to the fact that planning with a vision will have a positive outcome.

Lauding the efforts of volunteers and members of Noida Lok Manch, Shri Ravindra Kishore Sinha, Member of Parliament, Rajya Sabha said that society needs such voluntary organizations which aim to serve humanity. Shri Sinha narrated the story of Swami Vivekananda who worked tirelessly to help people and emphasized that members of Noida Lok Manch have similar credence of aiding people in need due which the country is pacing towards the path of growth for all.

Sharing his views, Mr. Ajay Chauhan, Trustee, Ritnand Balved Education Foundation opined that Amity and Noida Lok Manch share similar mission to improve the quality of lives of those in need, inculcating moral values amongst the youth and benefitting the society in every way possible which will aid in the development of nation at large.

Speaking on the occasion, Shri Prabhat Kumar, IAS (Retd.), President, Noida Lok Manch apprised the gathering work of the organization about wide abet of its activities including managing affairs of Cremation Ground, Noida Public Library, Two Sanskar Schools in Noida (exclusively for the under-privileged and socially oppressed childrenof the society), Community Radio Station in Greater Noida for villagers etc. Dweling on the other social services performed by NLM, he mentioned that NLM also focuses on upliftment of the marginalized classes of the society and taking regular initiatives in organizing healthcare camps for preventive as well as for therapeutic and screening needs. Shri Kumar pointed out that the organization has a vast and extensive network of volunteers and social workers to ensure that its social activities are undertaken in a most efficient manner and in a cost effective way.

During the occasion, Ms. Babita Nagar, Wrestler; Mr. Arjun Vajpayee (in absentia) and Shri Rajiv Kumar, MD & Vice-Chairman (in absentia) were awarded in recognition of their contribution towards the development of city.

University of Oxford: Oxford scientist named Australian of the Year in…