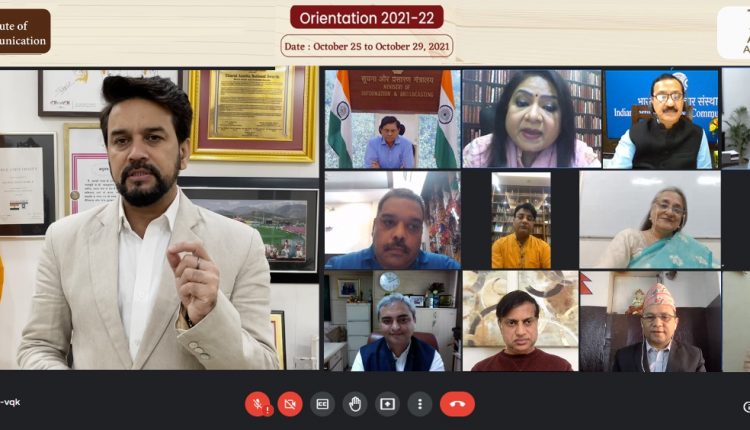 Need to draw a line between ‘Fact’ and ‘Fake’: Anurag Thakur

New Delhi : Union Minister of Information & Broadcasting Shri Anurag Thakur, while addressing the IIMC students at the closing ceremony of the week-long Orientation Programme-2021-22, said the nature of media has changed due to mobile, internet and digitalisation. In the changed era today, there is a need to draw a line between the ‘Fact’ and ‘Fake’. You have to protect your source, but also question them with equal vigour their facts and narrative. “Technology has entered every sector, Covid-19 has disrupted every plan in many ways, and we have a chance to make a fresh start, fresh outlook. The world needs those who bring about constructive change. As a media person you will be the custodian of truth and amplifier of information,” he said. Secretary, Ministry of Information & Broadcasting and Chairman of IIMC, Mr. Apoorva Chandra, Director General of IIMC, Prof. Sanjay Dwivedi, Additional Director-General Mr. Ashish Goyal and Convener of the Orientation Programme and Dean (Academic) Prof. Govind Singh, faculty members from all the centres of IIMC and students were also present.

Guiding the IIMC students, Shri Thakur said during Covid pandemic, communication has taken new meaning and sharing of information has taken on a new dimension altogether. “The world around you and the media landscape has changed and will change more by the time you enter the market. You will have to fight for the national interest and defend every voice to be heard. So, you have to make a habit of saying and writing very thoughtfully,” he added.

Shri Thakur said the Ministry of Information & Broadcasting, in the changing time, has been working on a human-centered communication system so that information can be delivered to the common man immediately. He said the government’s plan is to ensure timely information to the last person in society, and the regional media has an important role to play in it.

Correct use of right information is very important: Apurva Chandra

Secretary, Ministry of Information & Broadcasting and Chairman of IIMC, Mr. Apoorva Chandra said earlier only newspapers were the prime source of news, but today everything has been reduced to a mobile phone due to the unprecedented change in digital technology. Today, you have a wealth of information, but which information is important and which is not, it is not known to the common man. The Ministry of Information & Broadcasting is working seriously in this direction, so that people can make the right use of the right information, he added.

Director General of IIMC Prof. Sanjay Dwivedi said if there is one word that has been the most talked about in the last few years it is ‘Innovation’. Capacity, infrastructure, culture and strategy are key elements for innovation in any organisation. In the coming times, only those companies will exist, which will provide service based on innovation. He said the innovations made by the IIMC in the field of media education and research are an example for other media education institutions in the country.

Social media and TV are complementary to each other: Anurradha Prasad

Managing Director, News24, Ms. Anurradha Prasad, while addressing the students on the topic ‘Future of TV News’ said when we read a newspaper, we get the news of a day old, but in TV and digital media you also get the news of a minute ago. Just as TV channels and newspapers complement each other, social media and television too complement each other. She said when TV channels came, people used to say that newspapers would be closed, but it did not happen. The newspapers, which changed their content as per the changing scenario are still flourishing.

English is not the medium of success: Sankrant Sanu

In the second session, noted author Shri Sankrant Sanu interacted with the students on the topic ‘English for Communication Vs English as Medium’. He said when someone speaks good English, he is considered to be educated, while a person who speaks Hindi is considered to be inferior. When you go abroad, you come to know the fact that English is not the medium of success in any country. Out of 20 most developed countries of the world, only four developed countries use English and that too because it is their own language. In the remaining 16 countries, people use only their mother tongues.

Prof. in Kathmandu University Dr. Nirmal Mani Adhikari, while speaking on the topic ‘Communication Tradition of Bharatvarsh’, said India has better connect with the rest of the world, despite the diversity of languages, Vedas, and literature. He said people who went to study in other countries from India studied English language and then copied the same and created India’s education system. Due to this, the dominance of English over India’s education system and communication tradition increased.