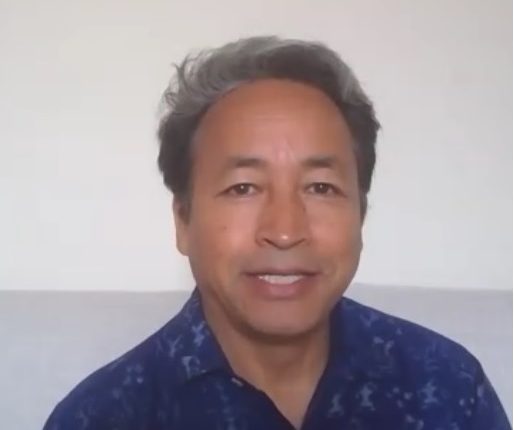 New Delhi: Responsible tourism has the potential to preserve the ancient tribal traditions, conserving the unique products and at the same time provide a means of sustainable livelihood, stated Shri Sonam Wangchuk, Founder, Student’s Educational & Cultural Movement of Ladakh (SECMOL) at a virtual conference on ‘Leveraging heritage of Tribal Communities’ organised by the apex industry body, The Associated Chamber of Commerce and Industry (ASSOCHAM).

ASSOCHAM Centre for Excellence (CoE) is celebrating the achievements of the tribal artisans and their contribution under the TEDP initiative on this occasion.

Speaking at the event, Shri Wangchuk explained that when tourism is opened up, artisans who would earlier need to go door to door to sell their market find a ready market among the tourists who come to visit them.

“So when villages from Ladakh were open for tourism, mothers who earlier operated farm stays found a ready visitor for her spare room. Her neighbour who is making handicraft products will now find a ready buyer for her products. And also her neighbor who could be a farmer or a provider of any other service would also find means to generate income. Her educated kids who would otherwise be migrating to other cities for employment would also not want to leave as they have a decent source of income now,” He said.

According to Shri Wangchuk, there is a need to tribalise the mainstream society instead of doing it the other way round. “These indigenous communities are known to live in harmony with nature. Look what industrialization has done to nature in the last 50 years. Almost 58 percent of all the wildlife has gone extinct. While in the Covid pandemic 4 million people lost their lives till now, air pollution on the other hand causes the death of almost 7 million people in the world every year. This is what rapid industrialization is causing,” he pointed out.

He explained that there is a need to support tribal people and the products that they make. “There is a need to bond with these people. Tourism if it is managed responsibly can be a great catalyst for both the tribal community as well as the mainstream society,” he added.

Ms Ira Singhal, Co-Chair ASSOCHAM National Empowerment Council & Joint Director, National Commission for Women, Government of India stated that there were several challenges faced by the tribal artisans, primarily among them being access to employment opportunities.

“Due to which these artisans were forced to leave their community and migrate to large cities in search of employment. They were not only losing their identity as tribal artisans but at the same time, their age-old tradition and culture were also getting lost and extinct. The Tribal Entrepreneurial Development program has started addressing these issues,” she said.

She further informed that the Ministry of Tribal Affairs and ASSOCHAM believe that by empowering women, you tend to empower the entire society. “I also wish to tell you that almost 64 percent of the TEDP beneficiaries till date are women. Thanks to our joint efforts, tribal women are now paving the way for economic development in their community,” she added.

The virtual event also had two sessions on Govt. Policies and Role of Private Companies in Promoting Tribal through CSR, E-Commerce, Digital Marketing and on Emerging Markets, Financing Opportunities and Export Potential of Indian Tribal Produces.

Moderating the first session, Shri Manu Gupta, Co- Founder, Sustainable Environment and Ecological Development Society (SEEDS) stated that there is a need for an effective decentralization and empowerment of the tribal community. “There is a need to improve their discoverability, and put them as equal partners for their unique contribution to the social fabric. There is a need to expedite the solutions to the problems that they are facing and at the same time not let go off the unique lifestyle that they are leading,” he said.

Mr.RishiPathania, CSR Head, UPL group stated that industries need to be ready to do a lot of work and have a long term commitment if they are to work with the tribal community. “The industry first needs to be sensitized before they start working on the space. Industry can certainly play the role of a catalyst here and ensure a mindset for a long-term commitment towards the tribal community,” he said.

Mr. Anurag Awasthi, Product Manager, Center of Excellence for Indigenous and Inclusive Products, Government of e-Marketplace (GeM) informed that through public procurement of goods and services, they are able to provide a sustainable means of livelihood to the tribal community. “Even people who go to government stores to buy products made by the tribal artisans, it results in a social impact and makes a difference in the lives of these artisans,” he said.

He explained that there are 1.5 lakh tribal artisans who are registered on the portal offering around 4500 products. “The portal is also giving an opportunity to people with disability or mobility issues. They have registered and listed their products and were assured of a ready market place even during the pandemic. In the last 10 months, orders worth Rs 20 crores were placed for new startups. These kinds of things were unheard of in public procurements earlier,” he said.

Moderating the second session, Dr. Arpita Mukherjee, Professor, Indian Council for Research on International Economic Relations (ICRIER) said that there is a need to focus more on the quality of the products and make products that can have the geographical indication (GI) tag which can indicate a specific geographical indication of the products origin. “A lot of indigenous communities in the US make products that are patented. We also need to start producing such products which can be patented or can have specific GI tags,” she pointed out.

Mr. Pawan Jain, President, Tribal Krafts stated that even while searching for tribal products for exports, the idea is to ensure that it is done the way it is normally done. “Most of the products that we procure from the tribal communities can be mass produced. However, it would not bring the exclusivity of the same. The shawls that we used to procure from Nagaland used to be weaved by the artisans in their spare time. You can give them the raw material and change colours, but keep the product per se untouched. Let them do the way they would normally do it,” he said.

MsIndu Thakur, Marketing officer, Micro finance at State Bank of India informed that banks play a major role in the development of the tribal community. “There are almost 7 lakh self-help groups that the banks are financing at present. The Non-governmental agencies play the role of a change agent by getting these tribal entrepreneurs to the banks and help them fulfill their banking needs,” She said.

Ms. Chetna Sinha, Founder- Chairman, Mann Deshi Bank and Mann Deshi Foundation stated that from her initial experience, she has realized that women entrepreneurs don’t generally want a loan from any bank or financial intuition but are looking for avenues to save their money. “We started off like that. Today we have more than 6 lakh members and have a deposit base of Rs 240 crores. We have many of the women entrepreneurs who come in groups of five to take loans and we have given loans to them,” She said.

Ms Sinha stated that the need of the hour is to bring credit innovation in the banking system. “There is a need to assess the requirement of your target population, check their cash flows, the duration of their credit requirement or their market linkages and then design specific products for them,” she informed.

Mr. Rajesh Rawat, Director, Export Promotion Council of Handicrafts revealed that India exports Rs 25000 crores worth of handicraft products to affluent countries like the USA, Australia, New Zealand and to the Middle East. “A lot more potential can be achieved, but we need to focus both on the backward and the forward linkages. We need to upskill the artisans for the products which are in sync and develop and scale it up,” he said.