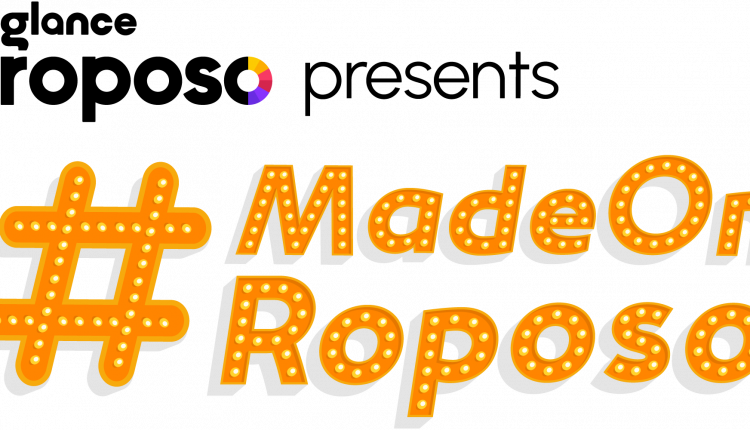 Mumbai: Bringing to an end a high-octane and fun-filled battle to identify India’s top short video content creators, #MadeonRoposo, a nation-wide talent hunt launched by Roposo named the show’s winners in the grand finale today as 18 finalists including 2 wild card entries vied for the top spots across five categories. The finale took place virtually as all the finalists joined the contest from their respective homes across different parts of the country. The show’s judges and mentors – Bollywood actress Neha Dhupia, renowned choreographer and director Farah Khan, and top casting director Mukesh Chhabra were present at the finale hosted by Siddarth Kanan in Mumbai.

The grand finale witnessed a high dose of entertainment including a fun banter between Farah and Siddharth, Mukesh’s unusual audition to be the new host, and an emotional moment experienced by Neha where she got teary-eyed while watching one of the finalists perform. Audience also got a glimpse into the inspiring lives of the #MadeonRoposo finalists, with stories that reflected their determination to pursue their passion. Each finalist went above and beyond to deliver spectacular performances, as they all competed for the title of #MadeonRoposo winner.

With a dream to represent India, Alka Periwal’s winning video in Health & Fitness category was a tribute to various Indian sportspersons through Yoga, while Harshita Grover celebrated the diverse cultures and cuisines of India in Fashion & Lifestyle through her fun fashion transitions from traditional to western wear. Nalini Sharma took top spot in the Breakout category with her preparation of Arabic dessert Aish-El-Saraya. Navin Panchal won over the judges through his comic take on a scene from iconic movie Sholay in the Acting & Comedy category where he played Veeru, Gabbar and Basanti himself. In the Music, Singing & Dancing category, Yamini Pandey saluted the revolutionary decision of India recognising the third gender and the pride month, through her performance.

Each of the final category winners have won cash prizes of INR 1 lakh each along with a once in a lifetime opportunity to create content with all the three celebrity judges*. Along with this, finalist Vishakha Pandey won a special internship with Mukesh Chhabra at his casting school in Mumbai as a prize for her video showcasing notable aspects of her hometown Banaras, Another finalist Roshan Mishra won the prize of a premium brand SUV car for his video of preparing a sweet Indian dish ‘cham cham’ whilst showing of his dancing skills in between*. The winners were unanimously selected basis their engagement score on videos, user votes garnered during semi-finals, creativity, performance, and uniqueness of the content they created in their respective categories.

Glance Roposo, one of India’s leading short video talent platforms, launched #MadeonRoposo, with the goal of finding the country’s next big creators of original short video content. This unique, two-month long virtual talent hunt received over 30,000 entries, across five categories including Fashion & Lifestyle, Health & Fitness, Acting & Comedy, Music, Singing & Dance, and Breakout, which included Food, DIY, etc. Throughout the show, the celebrity judges mentored these content creators with masterclass sessions, tips and showbiz tricks, to ensure these budding talents move closer to their goals. The grand finale was streamed on Roposo’s YouTube Channel and those who missed it, can watch it on Roposo’s Instagram page as well as smartphone lock screen platform Glance.

“With #MadeOnRoposo, we provided all aspiring content creators in India a huge platform and opportunity to showcase their unique talent and gain recognition on merit. The response has been overwhelming from across cities and categories, and as we draw the curtains on this show, we are proud to have been a catalyst in enriching India’s content creator landscape,” said  Mansi Jain, GM – Roposo.

Bollywood actress and judge Neha Dhupia said, “We truly believe that creativity is best manifested by producing truly original content though nothing much was happening to identify and groom such talents. We are really privileged that a well-known and credible talent platform like Glance Roposo came forward to help us with this mission through a pan-India programme like #MadeOnRoposo,” Dhupia added, “The contestants and winners of this competition have used the power of the Glance Roposo platform to tap into their own uniqueness and deliver incredibly engaging content. I am honoured to have been a mentor and a judge for such a talented group of content creators.”

Speaking about the diversity of talent on #MadeonRoposo, choreographer and director and judge Farah Khan said, “The performances at the grand finale embodied the authenticity and originality that we were seeking through #MadeOnRoposo. The key takeaway from this massive talent hunt is that to be a great entertainer on a digital platform like Glance Roposo, you don’t need to belong to certain cities, or even from certain fields like singing, dancing, and acting. You can cook, or have an interest in DIY, or fashion. If you have a creative way of expressing yourself, you can capture the imagination of any audience, through any medium.”

“With the meteoric rise in short video consumption across the world, creators now have the opportunity to become household names, purely on the strength of their individual talent. The Glance Roposo platform and #MadeOnRoposo have gone a long way in giving the top content creators of the future a stage to reach millions. My advice to them is to stay true to who they are, and to keep growing,” said casting director and show’s judge Mukesh Chhabra about the reach that #MadeonRoposo has given to creators.

With this spectacular contest, Glance Roposo has showed itself to be a powerful stage for aspiring creators, and an exciting destination to create and share unique, engaging videos. The platform allows users to discover video content in 12+ Indian languages across 25 different user-generated channels like comedy, films, news, fashion, and sports amongst others. Owned by Glance, Roposo has seen over 100 million downloads and is used by close to 1.2 million content creators. Glance recently acquired full stack e-commerce platform Shop101 as the company forayed into celebrity and influencer-led LIVE commerce segment.

*This is a general description, terms and conditions like availability are applicable for all rewards and prizes.