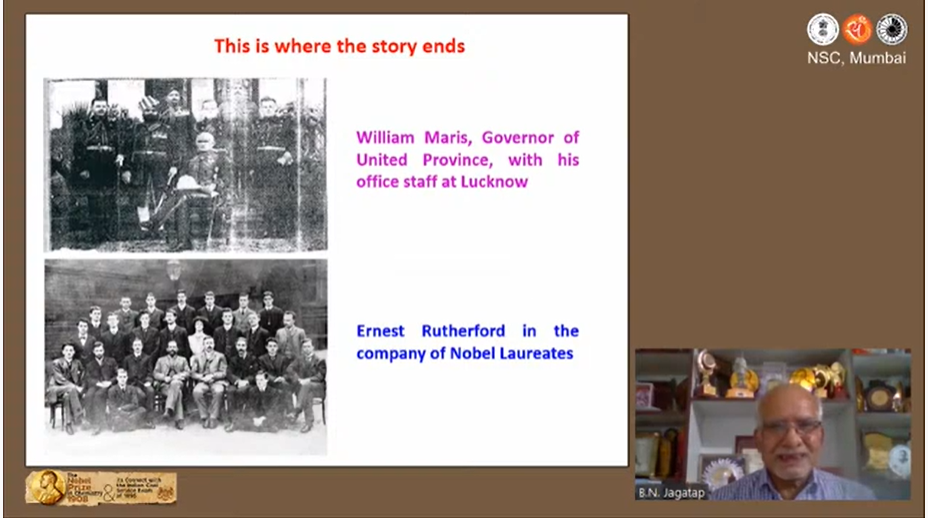 New Delhi: It is said that ‘Great Minds think Alike’! We can stretch this age-old idiom to say that ‘Great Minds Are Schooled Alike’, on learning that two great personalities of the 19th century who had reached the pinnacle of success in the respective fields were classmates. One of them is regarded as the ‘Father of Nuclear Physics’- Sir Ernest Rutherford. On the other hand, the ICS Officer in question was William Sinclair Marris, who had topped the ICS Examination in 1895, started his career as Assistant Magistrate in United Province during the British Raj; and then went on to become a Member of the Council of India and also the Vice Chancellor of the University of Durham. These two great men were friends in Canterbury College at Christchurch in New Zealand during the years 1890-93. The fate of incidents related to their academic careers decided the destiny of science and Indian civil administration in the following years.
Professor B.N. Jagtap, who is a Former Distinguished Scientist and Director, Chemical Group, BARC, Mumbai and Professor at Department of Physics, IIT Bombay, narrated this little known story in course of Nehru Science Centre’s lockdown Series lecture. In an eloquent style of story-telling, in the lecture titled as ‘The Nobel Prize in Chemistry 1908 & its connect with the Indian Civil Service Exam of 1885’, Prof Jagtap started by introducing ‘three and half characters’. While two of them are Sir Rutherford and William S. Marris, the story also related to another well-known British Administrator in pre-independent India – George Carmichael, who had topped the ICS Examination in 1886. The ‘half-character but the most important one’ referred by the Professor in his story is Walter Empson who was the Principal of Wanganui Collegiate School in New Zealand when Marris was a student there. In the year 1886, when Empson’s cousin Carmichael topped the ICS, he turned to his unusually-gifted 13-year old pupil Marris, who was popularly known as ‘Willie’ and advised him “You Go for the Indian Civil”. Eventually, Principal Empson planned the studies of his favourite student Willie. Then, in 1893, when Marris tops the class at Canterbury College, his seemingly ordinary classmate Rutherford ranked second. Marris, by virtue of being the highest scorer, earned the 1851-Exhibition Scholarship to do research under JJ Thompson at the Cambridge University in England. Eventually, on topping the ICS Examination in 1895 which is a watershed, Marris left the claim on the prestigious scholarship and so, it went to the second rank holder Rutherford. “Down the line, while Marris became a highly successful civil servant, Rutherford contributed immensely to the understanding of the physical world and mentored a large number of scientists who further contributed to what we know today about atoms and their behaviours”. Thus, had Marris not topped the ICS Exam of 1895, Rutherford would not have pursued research under Sir J.J.Thompson, based on which he further pursued researches and won the Nobel Prize in Chemistry in 1908! The second ranker Rutherford is regarded as one of the biggest scientists of all times and was given a prestigious burial in Westminster Abbey next to British legends like Sir Isaac Newton.

While narrating this little known connect between these great men, Prof. Jagtap advises youngsters to follow their dreams and pursue their field of interest. In course of this captivating story-telling session, the Professor also threw light on the history of Indian Civil Service Examinations and the prestigious Nobel Prizes. He highlighted a few little known and bizarre facts connected with these institutions. One such lesser known facts is that the Nobel Prize was not awarded a few times in history mainly during war times. But in 1948 also, the Peace Prize was not awarded. In that year, there was a nomination for Mahatma Gandhi. But Gandhi was assassinated just before the nominations were to close. The Nobel Committee had discussed and debated upon whether the award can be given posthumously. There are certain conditions for giving the award posthumously. It could be awarded posthumously only if the awardee dies after he is declared as the recipient of the award. In that particular year, the Committee decided not to award the Nobel Peace Prize. The statement that was issued read “There is no suitable candidate for the Award this year” and one of the comments went as “In this respect, Gandhi can only be compared to the founders of religions”.

Speaking about the evolution of Indian Civil Services, Prof Jagtap informed, it all began with the Battle of Plassey in 1757. Satyendranath Tagore, eldest brother of Rabindranath Tagore, was the first Indian to qualify in ICS Exam in 1863. In 1947, when India became independent, there were 322 Indian ICS Officers and 688 British ICS Officers.

Click here for accessing this enchanting lecture by Prof. B.N.Jagtap.