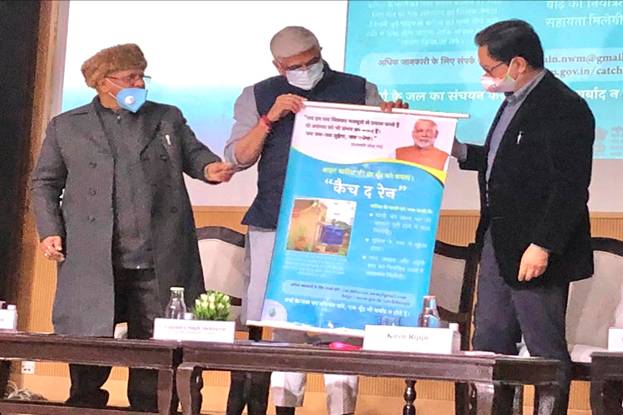 TheUnion Jal Shakti Minister Shri Shekhawat emphasized on the need to focus on water conservation and rainwater harvesting while Shri Rijijustressed on the importance of involving the youngsters in the revolutionary campaign.Shri Kataria said that the Union Government accords the highest priority to the issue of water conservation andthe need of the hour is to adopt an integrated approachtowards water management.The Ministers collectively unveiled the posters and IEC material promoting Catch the Rain campaign.

Ministry of YAS has formulated several schemes to promote…

Lessons learnt from COVID 19 crisis being incorporated in…

As a preparatory phase of JSA-II, the Ministry has involved Nehru Yuva Kendra Sangthan (NYKS) for undertaking ‘Catch the Rain’ awareness campaign to cover 623 districts. The awareness generation phase of campaign will run from mid-December 2020 to March 2021. NYKS will undertake this awareness building campaign through various IEC activities which will include conducting education & motivational programs, mass awareness campaigns, environment building including wall writing, banners & e-posters, knowledge competitions, demonstration activities like theme-based nukkadnataks& skits, branding & popularize the campaign by logos & printed IEC materials etc. During this period, the NYKS teams will also meet district administration, line departments and water agencies, hold meetings with Pradhans, local influencers and volunteers to further the cause and also prepare plans for the water conservation to be taken up in the next phase of the campaign.

NWM has launched a campaign Catch the rain” with tag line “catch the rain, where it falls, when it falls” in order to nudge all stake-holders to create Rain Water Harvesting Structures (RWHS) suitable to the climatic conditions and sub-soil strata to store rain water as rains falling in the four/five months of monsoon are the only source of water for most parts of the country. Drives to make water harvesting pits, rooftop RWHS and check dams; removal of encroachments and de-silting of tanks to increase their storage capacity; removal of obstructions in the channels which bring water to them from the catchment areas; repairs to traditional water harvesting structures like step-wells and using defunct bore-wells and old wells to put the water back to aquifers etc, are some of the activities suggested to be taken up with peoples’ active participation under this campaign. The collaboration with NYKS is a step to engage people at the grassroots through effective campaigning & IEC activities for implementation of the campaign.