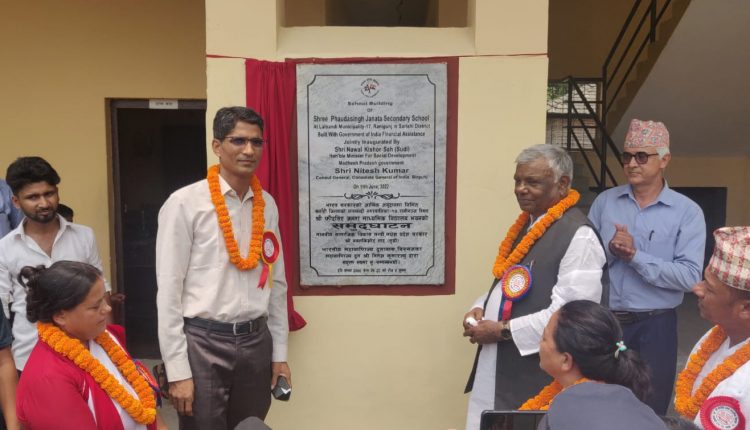 Kathmandu : Under the grant assistance from the Government of India, a new school building, Shree Faud Singh Janta Secondary School in Sarlahi District, Nepal, was inaugurated on Saturday, stated the Embassy in a press release.

The project is a testimony to the multi-faceted, strong and robust development partnership between India and Nepal in diverse sectors.

The building was built under the Government of India’s grant assistance in the education sector. The event was witnessed by local representatives, officials, people of Ranigunj and other stakeholders.

PolyU: PolyU InnoTech Open Day to be held on 16 July; An…

The project, built at the cost of NRs. 7.83 million, is one of the 75 projects being inaugurated this year in Nepal as part of “India@75 Azadi Ka Amrit Mahotsav” which celebrates 75 years of India’s independence. The new school building would create an improved environment for learning in the rural region and contribute to the development of education in the Sarlahi district.

The Government of India grant, under “Nepal-Bharat Development Cooperation” was utilized for the construction of a double-storey school building, including fifteen classrooms, two staircases and sanitation facilities.

Since 2003, India has taken up over 527 High Impact Community Development Projects (HICDPs) in Nepal and has completed 471 projects in the areas of health, education, drinking water, connectivity, sanitation and creation of other public utilities across all seven provinces of Nepal at the grassroots level.

As close neighbours, India and Nepal share wide-ranging and multi-sectoral cooperation. The implementation of this project reflects India’s continued commitment to continue to collaborate with the Government of Nepal in its socio-economic development and augmenting its physical infrastructure, especially in the education sector. (ANI)

PolyU: PolyU InnoTech Open Day to be held on 16 July; An opportunity to learn how to…