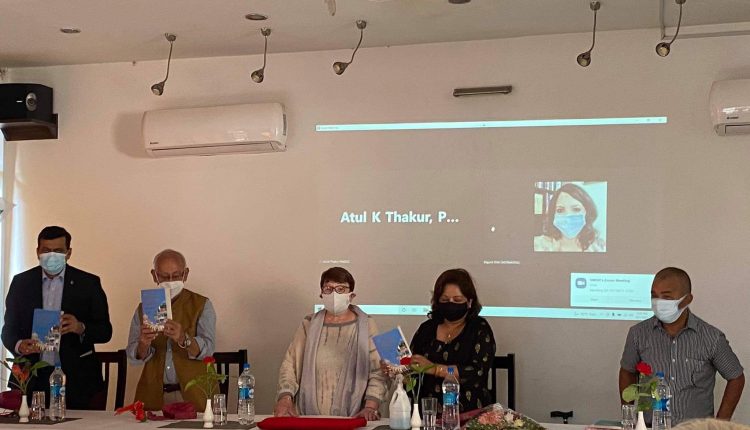 Kathmandu:  Participated by the leading public intellectuals and scholars, Nepal’s Former Finance Minister and remarkable economist Madhukar SJB Rana’s Nepal’s book, “An Alternative Development Paradigm for Nepal” has been launched (posthumously) on 7th August at Hotel Shaligram, Kathmandu. Curated and edited by the policy professional, writer and columnist Atul K Thakur and published by Vajra Publications, this is a major book with compilation of author’s representative writings with focus on Nepal’s development.

Nepal‘s eminent public intellectual and Former Finance Minister Madhukar SJB Rana’s remarkable writings and policy works had the guiding influence on Nepal’s policymaking, his book “An Alternative Development Paradigm for Nepal” is a treasure trove as a single document to understand about the country’s crucial development profile and fundamentals. Covering almost all the aspects of Nepal and South Asia’s priorities, the book is uniquely rich and deserves a wide-readership and long shelf-life. The book is also important as a development history of Nepal, a democracy in transition. In the post-Monarchy phases, Nepal’s democracy and realpolitik have shown unique characteristics. In the process of big shifts, Nepal’s journey is worth a serious study. In the absence of a book written from the policy perspectives, it is difficult to get a one-stop solution. With his book (being published posthumously), Madhukar SJB Rana showed the way.

The Chief Guest Dr Arzu Rana Deuba fondly remembered Madhukar SJB Rana as a source of inspiration and one of the most remarkable economists and policy experts who thought of Nepal’s alternative development paradigm and impacted positively. She recounted his exemplary works serving some of the country’s most important offices including as the illustrious Finance Minister.

Speaking on the occasion, IBN CEO said “It would have been even more blissful to celebrate Madhukar Sir’s book with having him around, my sincere respect and tribute to Madhukar Sir. I must compliment the book’s editor Atul K Thakur, Writer and Scholar for bringing this beautiful book out in the middle of unprecedented operational disruptions caused by the pandemic and lockdown. Also my compliments to Greta Rana and Sarit Rana—and the book’s publisher, Vajra Books. The author also served as MAN President and it holds high symbolic importance as I am here today, much later than him, I also had the opportunity to serve as the President, MAN. In fact, inspiration and guidance from him helped me as a policymaker serving MAN, NPC and IBN. He was a deep thinker and full of positivity, he remained committed to Nepal’s alternative development paradigm. His book should be read as a blueprint of a great visionary who worked for a glorious lifetime to take Nepal to the path of peaceful coexistence and prosperity. In a long and illustrious career, he contributed to institutional transformations.”

“Besides being a prolific policymaker, economist, development consultant and public speaker, Madhukar Sir was also a leading columnist who had written hundreds of in-depth columns and papers for leading the publications and think tanks in Nepal and across the globe. In later years too, he remained active. In fact, I vividly recall his widely-read and syndicated joint columns with Atul ji, where they both reimagined the regional and subregional economic cooperation with keeping the betterment of South Asia as the top priority,” he added.

Madhukar SJB Rana’s career was awe-inspiring. He started his professional career in 1967 as Manpower Economist, Federal Government of Canada and then shifted in 1969 to being Economics Lecturer in Nipissing University, and Associate Teaching Master, Cambrian College of Applied Arts & Technology in Canada. In 1971, he joined Nepal’s the Ford Foundation financed premier think tank the Centre for Economic Development & Administration (CEDA) of Tribhuvan University as Associate Professor and rose to be its Executive Director and also Project Director of USAID supported, Status of Women in Nepal. He has served as a wide range of non-academic experiences to include CEO in State Trading; Advisor in Ministry of Commerce and Industry; Chief Economic Advisor (Special Class) in Ministry of Finance, Special Advisor (Assistant Minister) in Ministry of Foreign Affairs, and Member of the SAARC Independent Commission on Poverty Alleviation. He authored the concept paper on South Asian Sub-regional cooperation among Bangladesh, Bhutan, India and Nepal and christened it as the SAARC Growth Quadrangle (SAGQ) which was endorsed by the participating counties in 1997.

The Secretary of State has made five reappointments to Arts…

He served as Senior Regional Programme Manager for UNDP; Senior Economic Adviser, Ministry of Finance (State Minister rank) and Finance Minister (2005). He has held a senior project management position with UNCTAD in Lao PDR and Afghanistan; a senior programme management position for South Asia with UNDP. He has done consultancy for ESCAP on industrialization in least developed countries and led an ESCAP advisory team on transit treaties and policies to Mongolia, Russia and Turkmenistan. He served on the Panel of Experts to discuss issues of LDCs at the 49th Board of Trade Meeting of UNCTAD, Geneva in 2002. In private business, he founded Nepal’s first publicly-held finance company and is was Founder Chairman, Shaligram Apartment-Hotel (Pvt) Ltd—another first entrepreneurial venture for Nepal. He had written extensively for the think tanks, daily newspapers, magazines and websites of Nepal and abroad in the areas of diplomacy, political economy, management and pro-poor development. He was President Management Association of Nepal and Charter Vice President and Past President, Rotary Club of Jawalakhel. In MAN he successfully initiated its executive development and consultancy programmes for the private sectorbased on his experience in research, training and consultancy. He also served as a Professor, South Asian Institute of Management (SAIM) which is a private school of management with him as one of five founders. He was on the Academic Panel of Advisers, SAARC Chamber of Commerce and Industry, Islamabad, and International Advisory Panel, South Asian Policy Research Institute, Colombo, Sri Lanka—a regional think tank founded by former President Chandrika B Kumaratunga.

Atul K Thakur, the book’s editor shared his recollections in a moving account, “Nepal’s development discourses are certainly facing a void in absence of Madhukar SJB Rana, a remarkable economist and policy expert. In 2019, he passed away battling the complications of heart surgeries. His lost battle with his own heart shattered many hearts, especially of those who knew him closely as a kind human being and a remarkable scholar. He spent a meaningful life, working tirelessly to support his country in achieving inclusive growth. Although a believer in market economy, he never undermined the role of the state as a great enabler for creating a level playing field. He served the country in different important roles including as the finance minister, his contributions for strengthening the base of economy and placing Nepal formidably in the frameworks of regional and sub-regional cooperation in South Asia. He should be also known as a pioneer who did best possible for improving the prospects of cross-border trade, in fact, he sensitised the governments in Nepal and India for giving due attention on the connectivity in border areas.”

Thakur added, “As a gifted writer and public speaker, Madhukar Sir was someone to rely on for the masses and even policymakers. At the fag end of his life, he was concerned about bringing his selected writings into a book. For years, we were the co-authors for think tanks and newspapers including Kathmandu Post. As it was not possible for him anymore to deal with the words, I made a promise during our last held conversation to curate, edit and publish his book, An Alternative Development Paradigm for Nepal. Today, it gives me utmost satisfaction to complete a work on Nepal’s developmental profile, aspirations and way forward. His body of work was large, based on our discussions in happier times and my own editorial judgements, the book’s content plan was finalised. Since now the book is before the readers’, they are most-suited to ascertain its effectiveness. Nevertheless, in my personal view, this is an essential read for the policymakers in the government and industry alike—besides being appealing for the scholars and aspiring professionals. In true sense, Madhukar ji was a South Asian—and his book holds importance in Nepal and beyond borders.

He was a mentor and highly respected friend for me as well, it was a privilege for me to engage with him for the numerous pieces of writings. Surely, he was a custodian of the finest scholaric tradition of Nepal and South Asia—and his level of understanding will be quite elusive to get so often in the policy circle. I am genuinely hopeful that his book will be a useful document for the generations to come for knowing all about Nepal’s development fundamentals—the challenges and opportunities. Madhukar Sir’s edge on the home and foreign affairs was equally profound, his book certainly reflects that too. His book would have made him ecstatic, a sense of not seeing this happen in his absence is pitiful. However, as I am offering my sincere tribute to him with this book—I have satisfaction of accomplishing a mission.”

The early praises for the book:
“Madhukar SJB Rana was the quintessential public intellectual of Nepal who took his vast learning and experience as a call to serve the nation. The elan in which he combined policy ideas, institutional reforms and public leadership should educate and inspire the younger generation.”
– Swarnim Wagle, PhD; Former Vice-Chair, National Planning Commission, Nepal
“Madhukar SJB Rana lived at the intersection of different worlds as a great-grandson of Maharaja Juddha Shumsher Jung Bahadur Rana and also as a distinguished development economist. He played a major role in Nepal as both a consultant and administrator, including serving as the Minister of Finance in 2005. These essays’ cover an impressive range of topics—and emphasise repeatedly his commitment to the devolution of power to local level and to economic nationalism—also to regional and sub-regional cooperation across South Asia and the Asian continent as a whole, in which he saw Nepal’s potential to play a central role.”
-John Whelpton, Historian, Linguist and a Specialist in the History of Nepal

“Madhukar SJB Rana should be remembered as a prolific development economist, global thinker and policy practitioner—who worked tirelessly for the development of Nepal. Let us celebrate the happy memories of his exemplary works and humane persona.”
Ajit Thapa, Management & Development Scholar

“Madhukar was truly a dedicated economist and thinker ahead of his time. Kudos to Atul K Thakur for an excellent job in bringing together this collection, a tribute to a fine mind that will be missed in the development forums for a long time. For a brilliant economist and the change-maker, this collection is a fitting tribute. You must read it.”
Rajeshwari R L Rana, Madhukar SJB Rana’s Elder Sister

Greta Rana has penned in her beautifully written foreword of the book, “Even when he was dying, the author’s (my late husband Madhukar SJB Rana) mind was still full of development schemes. The last idea he shared with me was the idea that if every woman farmer in Nepal had access to a washing machine it would take the drudgery out of lives valuable for their farming skills. The pieces in this book are a treasure trove of ideas for development economists. They contain the thoughts of an active, eclectic mind which remained so even in his dying days. Madhukar’s thought processes were well-understood by his co-author for a long time and the editor of this book, Atul K Thakur. As Madhukar had written so much and with deep insights, it was not an easy task to select his writings and present them in an excellent book form. I urge you to read his collected writings in the book, particularly if you are interested in the development of Nepal. They contain the thoughts of a man I have been privileged to know well.”
The book is available with the publisher, in the stores and on e-retail platforms.

Élisabeth Brière announces $293,500 in Government of Canada support for ACET