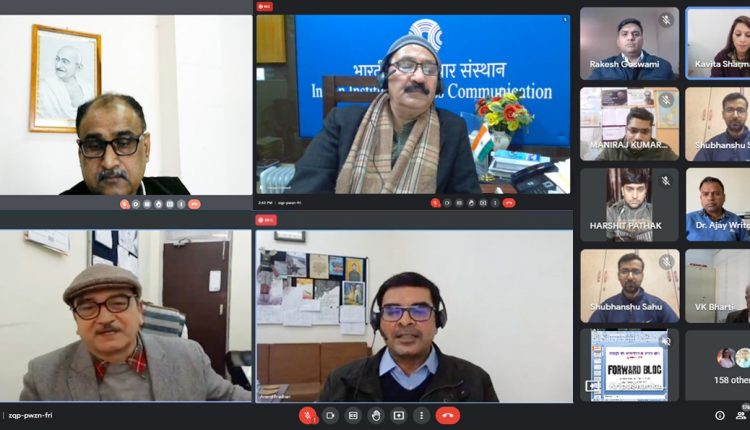 New Delhi : Bharatbodh is the basic element of Subhas Chandra Bose’s journalism and the revolutionary ideas of Netaji and his national ideology are relevant even today said Prof. Kripashankar Choubey, HoD, Department of Mass Communication at Mahatma Gandhi Antarrashtriya Hindi Vishwavidyalaya, Wardha while addressing the ‘Friday Dialogue’ programme organised by the Indian Institute of Mass Communication (IIMC) on the topic ‘Bharatbodh in the Journalism of  Netaji’.

Prof Choubey said that Netaji Subhash Chandra Bose founded ‘Azad Hind Radio’ in 1942 and for the first time on July 6, 1944 he addressed Mahatama Gandhi as ‘Father of the Nation’. On this occasion the Director General of the Institute, Prof. Sanjay Dwivedi was also present.

Prof. Choubey opined that Subhash Chandra Bose had linked the purpose of his journalism with the goal of complete independence. Along with the newspaper, he also used radio for the purpose of attaining independence. In 1941, Netaji Subhash Chandra Bose from ‘Radio Germany’ had said in a message to the Indians, “You give me blood, I will give you freedom”.

According to Prof. Choubey, Netaji, who gave new energy to the country, was one of the great freedom fighters of India, from whom the youth of today’s era also take inspiration. The slogan of ‘Jai Hind’ given by him became the national slogan of the whole country. Netaji Subhash Chandra Bose inspired millions of people with his thoughts. Netaji used to say that if we want to empower India, then we need to adopt the right approach and youth have an important role in this work.

Prof. Choubey said that at the time of establishment of Azad Hind government, Netaji had promised to create an India where everyone has equal rights and equal opportunities while taking oath. Balanced development of the country at every level of society, opportunity for nation building to every individual and his role in the progress of the nation was an important part of Netaji’s vision. Netaji believed that a true man is one who respects women in every situation. This was the reason that he established the Rani Jhansi Regiment in the Azad Hind Fauj, setting a unique example of women empowerment.

The program was moderated by Kavita Sharma and the welcome address was delivered by Prof. (Dr.) Anand Pradhan, Course Director, Department of Hindi Journalism while Dean (Academics) Prof. (Dr.) Govind Singh delivered the vote of thanks.

University of Bath: Keeping up with the first law of robotics: A new photonic effect for accelerated drug discovery