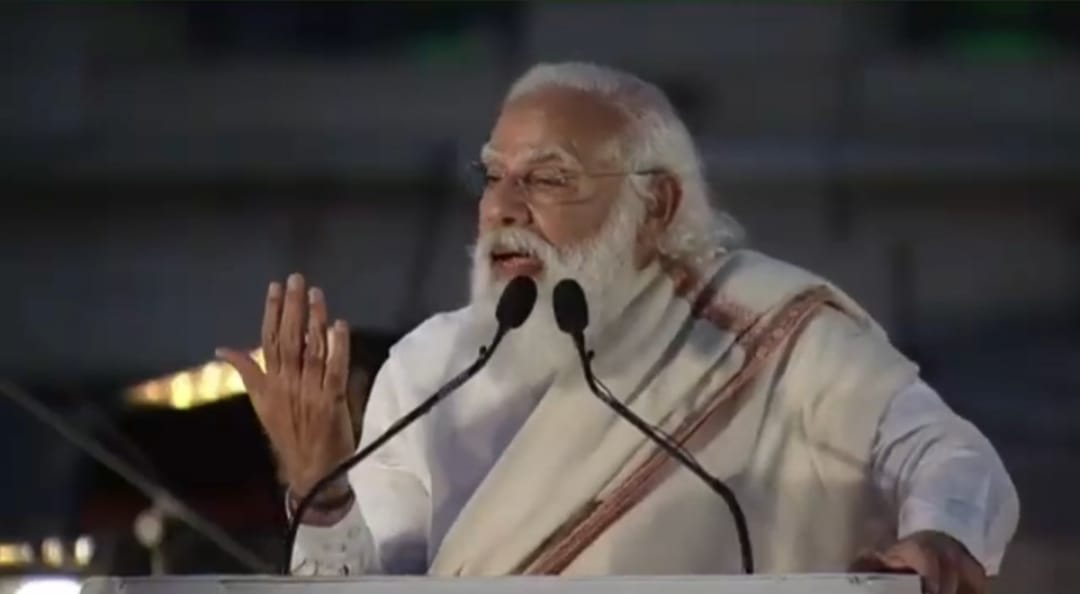 Netaji is embodiment of India’s might and inspiration: PM Narendra Modi

kolkata: The Prime Minister, Shri Narendra Modi attended the 125th Birth Anniversary of Netaji Subhas Chandra Bose in Kolkata. He presided over the inaugural function of the ‘Parakram Diwas’ celebrations at Victoria Memorial in Kolkata. A permanent exhibition and a Projection Mapping Show on Netaji was inaugurated on the occasion. A commemorative coin and postage stamp was also released by the Prime Minister. A cultural programme “Amra Nuton Jouboneri Doot”, based on the theme of Netaji, was also held.

Before this event, the Prime Minister visited Netaji Bhawan, Netaji Subhas Bose’s home at Elgin Road, to pay his respect to Netaji. Later he proceeded to the National Library, Kolkata, where an International Conference “Re-visiting the legacy of Netaji Subhas in the 21st century” and an Artists’ Camp were organized. The Prime Minister also interacted with the artists and conference participants, before attending the celebration of Parakram Divas at Victoria Memorial.

Speaking on occasion, The Prime Minister said that today is the birthday of that brave son of Maa Bharti who gave new direction to the dream of independent India. Today is the day we celebrate the consciousness that tore through the darkness of slavery and challenged the mightiest power of the world with the words that I will not beg for freedom, I will take it.

The Prime Minister conveyed that the country has decided to celebrate Netaji’s birth anniversary, i.e. 23 January every year as ‘Parakram Divas’ in order to honour and remember Netaji’s indomitable spirit and selfless service to the nation. Shri Modi asserted that Netaji is embodiment of India’s might and inspiration.

Compendiums on hydrogen and fuel cell, materials for energy…

JEE (Advanced) 2021 examination for admission in IITs will…

The Prime Minister termed It to be his good fortune that in 2018 the government named the island of Andaman as Netaji Subhash Chandra Bose Island. He said that respecting the feelings of the country, the files related to Netaji were also made public by the government. He also mentioned with pride the participation of the INA Veterans Parade in the 26 January Parade and fulfilling Netaji’s dream of unfurling tricolour on the Red Fort in Delhi at the commemoration of 75th anniversary of Azad Hind Government’ at Red Fort

Referring to the poignant question that Netaji asked his nephew Sisir Bose before executing the daring escape, the Prime Minister said “if, today, every Indian places his hand on their heart and feels the presence of Netaji, then he will hear the same question: will you do something for me? This work, this task, this goal is to make India self-reliant today. People of the country, every region of the country, every person of the country is part of this.”

Compendiums on hydrogen and fuel cell, materials for energy storage &…

Parliament passes the National Institutes of Food Technology, Entrepreneurship and…