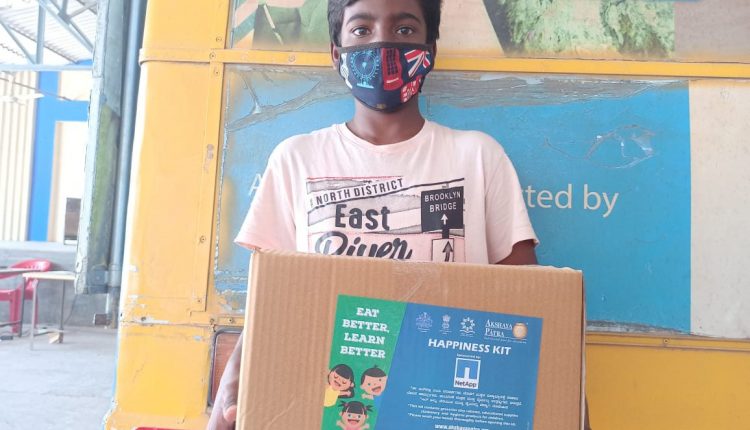 Mumbai: The pandemic has posed a public health crisis and also been a major contributor to increasing hunger levels among underprivileged strata of society, disrupting the entire economic fabric of the country. Simultaneously, it also created havoc in the food supply chain, leading to acute food insecurity nationwide. NetApp, a global cloud-led, data-centric software company, partnered with The Akshaya Patra Foundation for distribution of 10,000 Happiness Kits to underprivileged government school children and their families in Bangalore. The partnership between NetApp and Akshaya Patra has been ongoing for 7 long years. NetApp had also been a sponsor for Mid-Day Meals for 5,000 children in government schools in Bangalore before the schools shut down during the lockdown.

Speaking about the feeding initiative, Ravi Chhabria, MD, NetApp India, said that, “Akshaya Patra is doing stellar work in the area of child hunger and malnutrition. It is well known that mid-day meals have resulted in better school attendance and lower dropout rates. Education and hunger relief are both big areas of giving for NetApp because they are the first step towards enabling an inclusive community. During the last seven years, we have had multiple associations with The Akshaya Patra Foundation, whether it be a charity cooking competition, or donating food delivery vehicles, cooking appliances or – most importantly for us – volunteering our time. We really look forward to associating with them in future as well, continuing on the journey to better education and health for young children.”

The focus of NetApp’s CSR programs is largely on:

Shridhar Venkat, CEO, The Akshaya Patra Foundation said, “I am grateful for the trust that NetApp has shown in us. Last year has been difficult for the entire nation with loss of livelihoods especially among vulnerable groups. The one lesson we have learnt is that empathy and compassion are twin parameters that define Indians. We have served over 12 crore meals as part of our Covid food relief efforts and it’s been only possible due to the huge support we have received from corporates, govt, and the general public. It’s only collective effort which can help us overcome the massive food insecurity present in our country.”

NetApp also contributed generously toward the distribution of 14,738 food kits to passengers travelling on Shramik trains from Bangalore to Uttar Pradesh, West Bengal, Orissa, Bihar and Jharkhand. Even during these virtual times, NetApp employees invested in volunteering for the varied programs run by Akshaya Patra Foundation. Additionally, as part of NetApp’s observance of Hunger Month in November 2020, the company organized a webinar with participation from their employees and Akshaya Patra Foundation to discuss about the importance of food as essential to life and access to food as a fundamental right. The webinar was followed by a virtual tour of a kitchen. Volunteers noted how hot and nutritious meals were being cooked for government school children before the schools shut down. 345 employee volunteers from more than 10 countries participated.