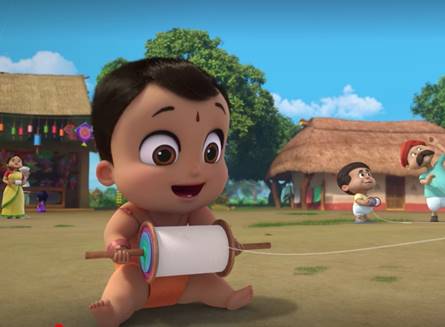 From searching how to make laddoos online to themed birthday cakes, Mighty Little Bheem has become a favourite amongst millions of viewers across the globe since premiering in 2019. Produced by Green Gold Animation, the series authentically captures India’s culture through the adventures of the young boy from cooking Pongal to flying kites in his village.

Duke University: The Past, Present And Future Of…

Netflix and UNESCO (United Nations Educational, Scientific and Cultural Organization) have come together to celebrate India’s rich cultural heritage through Mighty Little Bheem. Over the next year, a series of fun short videos themed ‘One Country, Incredible Diversity’ will shine a light on India’s cultural journey, including monuments, living heritage, performing arts, social practices, rituals and festivals such as Dussehra, Diwali and Holi. UNESCO seeks to encourage the identification, protection, and preservation of cultural and natural heritage around the world considered to be of outstanding value to humanity.

The short videos to be released on UNESCO New Delhi’s Facebook, Instagram, YouTube and Twitter pages, will demonstrate how cultural history enriches people’s everyday lives by covering everything from food and traditions to languages and storytelling. The first video was released today to celebrate the 75th Anniversary of India’s Independence (Azadi Ka Amrit Mahotsav), a day that brings the entire country together.

Duke University: The Past, Present And Future Of Redistricting In North Carolina And…

Duke University: The Past, Present And Future Of Redistricting In North Carolina…

iednewsdesk Sep 27, 2021
Scholars, practitioners and advocates will examine the legal and political landscape of redistricting, preview…