Scientists from the National University of Singapore (NUS) Department of Pharmacy have developed an improved pharmaceutical drug for the treatment of the most common heart rhythm disturbance – atrial fibrillation (AF). The 8-member research team took 8 years to achieve this technological breakthrough which could benefit millions of AF patients worldwide.

AF is a serious condition that can lead to heart failure, early mortality and stroke. For AF patients, there are currently medications which are used to control AF and maintain normal rhythm. Ironically, these drugs whilst treating AF can promote a different type of heart rhythm disturbance in the lower heart chambers, also known as ventricular arrhythmia, which is potentially more dangerous or even fatal. Some of these existing AF medications are also toxic to other organs such as the liver, lungs and thyroid gland. Hence, there is an unmet need to develop efficacious and safer medications to treat AF.

Patents have been filed for the new drug candidate, termed as poyendarone. The research team has tested poyendarone in laboratory studies and the promising results position the drug to be a gamechanger with greater safety and efficacy for clinical trials. It is noteworthy that there has not been a regulatory approved AF drug since 2009.

The findings were first published in the journal Acta Phamaceutica Sinica B on 16 March 2022.

The research team led by Professor Eric Chan from the NUS Department of Pharmacy discovered that a current drug for AF, called dronedarone, causes the inactivation of a key heart enzyme. Normally, the enzyme converts an unsaturated fatty acid to metabolites that facilitate heart physiological functions such as normal beating and heart muscle cell well-being. Dronedarone is metabolised by the heart enzyme to form a drug metabolite that can irreversibly bind to the enzyme’s active site, hence inactivating it. The inactivation of the enzyme in turn causes ventricular arrhythmia. Patients who experience ventricular arrhythmia due to dronedarone have to stop the medication immediately while other treatment options are considered.

Armed with this knowledge, the NUS team successfully circumvented this potentially lethal side effect by modifying the chemical structure of dronedarone. This was done through the subtle replacement of selected hydrogen atoms present on the drug molecule with deuterium atoms, in a process known as deuteration. Through this change, the reactivity of the metabolite is reduced and it is no longer able to inactivate the key heart enzyme. Through laboratory studies, the team also found that the improved drug retained several favourable drug-related properties such as how it treats AF efficaciously and can be processed by the body efficiently. Like dronedarone, the new drug molecule poyendarone is expected to be administered as tablets. 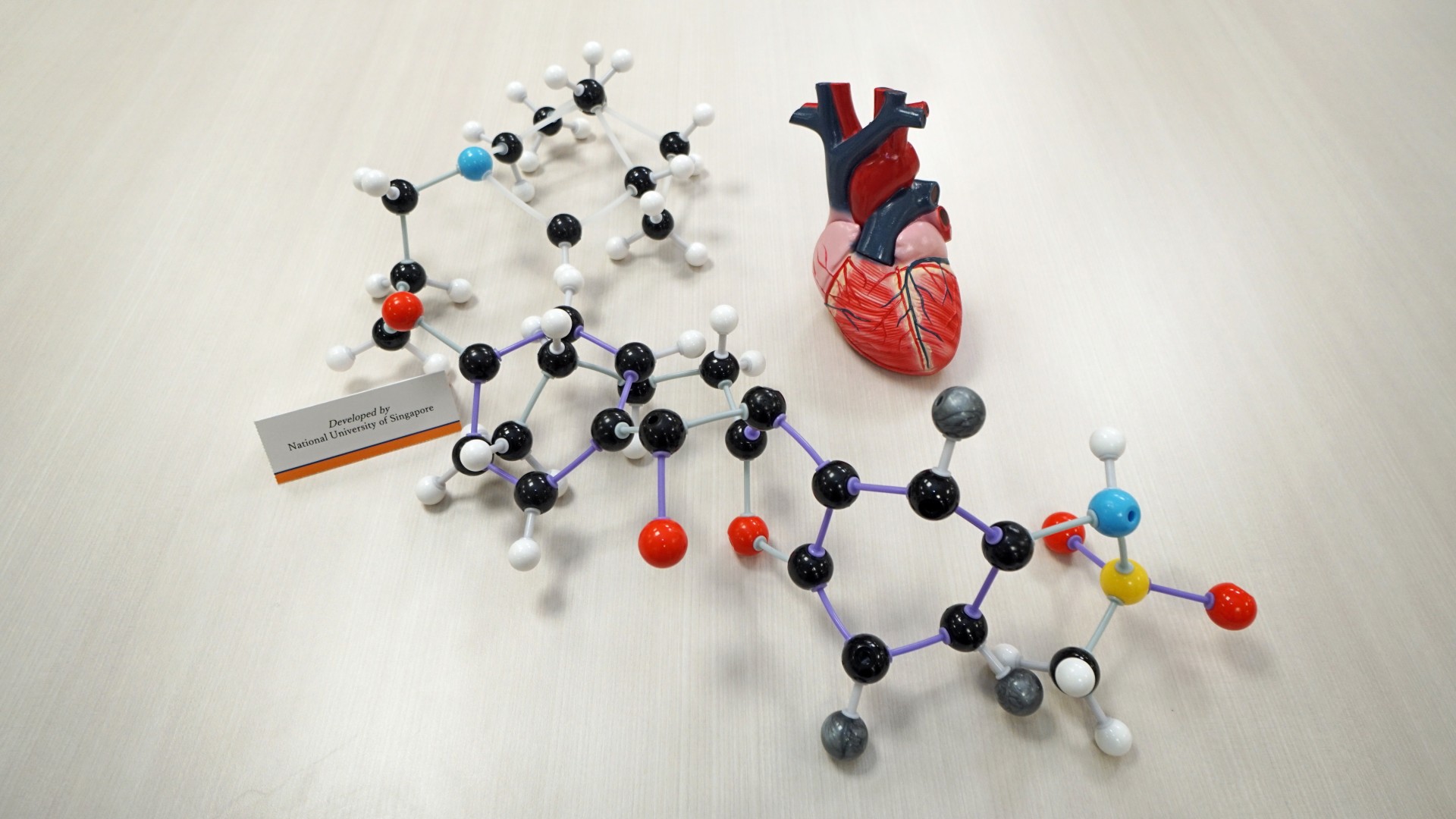 Molecular structure of poyendarone, a new drug candidate for the treatment of atrial fibrillation.

The development of an improved version of an existing drug that is both efficacious and safer is important to address the unmet medical need in AF therapy. Prof Chan said, “This is the first time deuteration as a drug discovery strategy is applied to optimise the efficacy while mitigating the side effects of a drug molecule. Our research findings demonstrate an innovative discovery platform that can enhance patient care via the development of efficacious and safe pharmaceuticals.”

“There is a strong need to develop safe, efficacious and accessible anti-arrhythmic treatments to manage the ever-growing number of AF patients around the world, which is currently estimated to be more than 35 million. Poyendarone represents a paradigm shift in enhancing the characteristics of current drugs, selectively eliminating dangerous side effects and organ toxicities whilst maintaining its ability to regulate abnormal heart rhythm,” said clinical collaborator Dr Pipin Kojodjojo, a cardiologist from the Asian Heart & Vascular Centre (AHVC) Singapore and Adjunct Associate Professor at the NUS Yong Loo Lin School of Medicine.

The research team is looking into opportunities to conduct relevant clinical trials that will establish drug safety and efficacy, allowing for regulatory approval and commercial availability.