Thermoelectric materials convert thermal energy directly into electricity through a process that involves a solid-state electron and phonon diffusion process. Though the principle is known for two centuries, it had limited utility as most known thermoelectric materials’ energy conversion efficiency is very low. Nanotechnology brought innovations to improve the efficiency of materials, but the mass-market application of such innovations has remained restricted due to the low device conversion efficiency of 6-10%. This makes the electricity produced costlier than other technologies.

Researchers from the International Advanced Research Centre for Powder Metallurgy & New Materials (ARCI), an autonomous institute of the Department of Science & Technology, have designed and developed thermoelectric modules using lead telluride (PbTe) and magnesium stannite silicide (Mg2Si1-xSnx) compounds, which gives more than 10% conversion efficiency. This work has been published in the journal‘Materials Research Bulletin’ recently.

The thermoelectric device, which requires a metal electrode electrically connected to semiconductor thermoelectric materials, needs two essential functional requirements. The joint should be stable at elevated operating temperature (300-600°C) and should not undergo any thermochemical degradation. It should have the least contact resistance so that the current flow and the power delivered reach a maximum.

The ARCI team explored various metallization methods and diffusion barrier materials with a systemic approach to make a stable bismuth-doped Mg2(Si1-xSnx)-Cu joint to fabricate a thermoelectric generator. A single-step direct vacuum hot pressing of bismuth-doped magnesium silicide stannide (Mg2(Si0.38Sn0.6)Bi0.02) powder produced a dense pellet with a mechanically stable metalized layer suitable to use in thermoelectric modules up to 400°C.

The bismuth-doped magnesium silicide stannide powder synthesized by induction melting of constituent elements and ball milling of the solidified ingots was hot-pressed with SS304 and copper (Cu) powders.  The joint’s specific contact resistance is around 4.4 µΩ.cm2, which is the lowest value reported so far in this material.

The joint showed excellent thermal stability up to 450°C temperature when tested for 15 days, with insignificant change in the reaction layers thickness at the interface. By using these joints, a thermoelectric device has been developed successfully and tested for its performance. 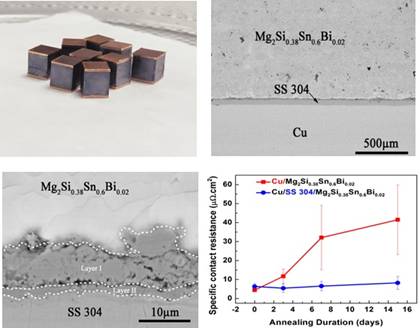 Figure 1 shows the TE legs, SEM micrograph, and the variation of contact resistance with annealing of the Mg2(Si0.38Sn0.6) Bi0.02-Cu joint with SS 304 barrier layer.

Figure 1 SEM micrograph of Mg2(Si0.38Sn0.6) Bi0.02-Cu joint with SS 304 diffusion barrier layer (left) and the variation of specific contact resistance with annealing time at 450°C. The interfaces are free from mechanical defects showing perfect diffusion bonding of Cu with SS304. At the SS304/Mg2Si0.38Sn0.6Bi0.02 interface, a continuous reaction layer with two sublayers was developed. The combined thickness of the reaction layers varied from 12 to 30 µm. The good bonding between the Mg2(Si0.38Sn0.6) Bi0.02 and SS 304 due to these reaction layers makes the hot-pressed pellets suitable for mechanically dicing up to 3 mm x 3mm cross-section legs usually used in TE modules. Thus the research demonstrated a single-step, low-cost process to fabricate a reliable metal-thermoelectric joint with less than 5 µΩ.cm2 contact resistance to fabricate TEG.

Ohio State University: Scientists on the scent of flavor enhancement