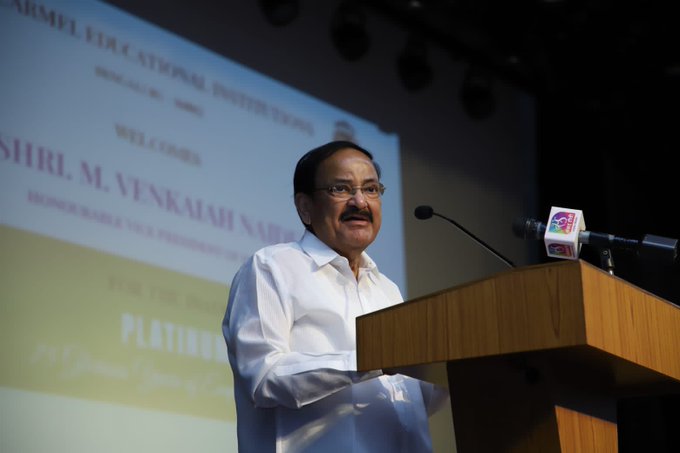 New Delhi: Vice President M. Venkaiah Naidu said that New National Education Policy is a very good step in the right direction and it should be honoured and implemented in letter and spirit. Addressing the Platinum Jubilee celebration of Mount Carmel College in Bengaluru on Saturday, he said that New Education Policy is also giving importance to mother tongue. Primary basic education must be in mother tongue because it is easy to understand, grasp and communicate. He advised the students to learn as many languages as possible.

Stressing upon women’s education Mr. Naidu said that 50 percent of the population are women, they should be given equal right, place and opportunity for their empowerment. Women’s education needs to be further supported by the government. He said that right from the ancient time there was clear emphasis on women education. India has a glorious heritage in education since ancient time.

The Vice President said, Government is focussing on skill development which will equip our youths for our nation-building activities. Mr. Naidu said that there are certain challenges before the country in the form of poverty and illiteracy and the government should overcome these challenges. He said that India is the most tolerant country in the world and secularism is safe in this country, not because of any government or party, but because it is in the blood and veins of every individual living in the country. Karnataka Governor Thawarchand Ghelot and Former Governor of Rajasthan, Margaret Alwa participated in the event.