Even in the age of digital cash transactions, the coin is a universal medium of monetary exchange. But where did the idea of coinage come from? A major new project in Oxford University’s Faculty of Classics seeks to investigate its origins and development.

The CHANGE Project is led by Professor Andrew Meadows, a Fellow and Tutor in Ancient History at New College and former Curator of Greek Coins at the British Museum. He received a €2 million Consolidator Grant from the European Research Council for the five-year project. 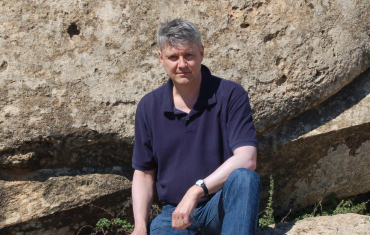 Professor Andrew Meadows, a Fellow and Tutor in Ancient History at New College and former Curator of Greek Coins at the British Museum

The project will use digital methods to gather evidence for the development of the monetary economy in ancient Anatolia for the first time. Anatolia, which is also known as Asia Minor, made up the majority of modern-day Turkey. The project will chart developments from the invention of coinage there in the late 7th Century BC to the absorption of the region of by Rome in c.30 BC.

‘Anatolia is where coinage begins as a monetary medium in the world, and this project will explore those origins and how it developed over time,’ says Professor Meadows. ‘We will use new digital technology to answer major questions concerning the economic history of Anatolia. We hope to generate a new account of the beginning of coinage and its rise as a monetary medium.’

CHANGE aims to produce a complete overview of the coins by around 336 cities, four empires, 60 kingdoms and around 50 independent dynasties in this period and region. Using Linked Open Data technology, and through a collaboration with the Münzkabinett, Staatliche Museen zu Berlin and the British Museum, the team will bring together a database of around 50,000 coins in multiple public collections.

The project will assemble a full record of published finds of coins from hoard and excavation contexts across Anatolia. ‘This data will permit a detailed mapping of movement of coinage over time and place, and allow the exploration of monetary behaviour across political and geographical space,’ says Professor Meadows.

It will also assemble a checklist of epigraphic documents which recorded monetary exchanges across ancient Anatolia. ‘This will allow a parallel exploration of monetary behaviour across objects and text,’ says Professor Meadows.

More than 2,700 years later, coins are everywhere and sometimes take on a political significance. The Conservative party used the slogan “last chance to save the pound” to campaign against the Euro before the UK general election in 2001.

“Coinage has had remarkable durability as a medium,” says Professor Meadows. ‘Even in the days of the Euro where monetary forms are being unified, the existence of coinage and how it looks is still a crucial element. Every country has its own design for the Euro, which is a sign of the enduring significance of the medium to us.’

The CHANGE project shows what can be done when ‘traditional’ research methods are combined with Digital Humanities tools. It builds on current initiatives in the field of Linked Open Data such as the Nomisma project (http://nomisma.org/). Professor Meadows hopes the model used in CHANGE will be replicated more widely. “It offers a model for the re-evaluation of the monetary economy of the whole Ancient Mediterranean,” he says.

Prof Ananta Charan Sukla: A scholar to the core