The Stanford student body has elected sophomore Munira Alimire and junior Vianna Vo as president and vice president, respectively, of the Associated Students of Stanford University for the 2020-21 academic year. Their election comes amid historic global challenges that threaten day-to-day life for Stanford students. 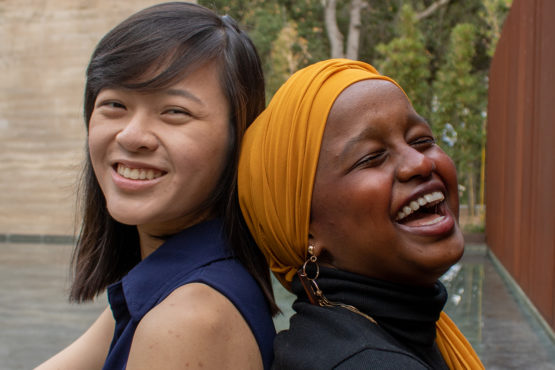 “In the past few weeks, it has become clear, now more than ever, that strong student advocacy is needed to pull together our community,” Vo said. “We have witnessed firsthand the tremors that run through our community when acts of injustice are committed, on-campus or at-large.”

Alimire and Vo take office as the nation reels from a tumultuous week of demonstrations in response to the death of George Floyd in Minneapolis on Memorial Day. In cities across the country, Americans took to the streets to protest racial injustices. This comes after almost three-months of shelter-in-place orders caused by the COVID-19 pandemic, which has completely transformed life for Stanford students.

Vo said that as she and Alimire took the oath of office this week, the gravity of their responsibility to support students in the face of these and other challenges set in.

“I intend to open my ears and heart to the demands of the community and to work tirelessly until their wishes are heard,” she said. “This is a responsibility that I do not take lightly, and I hope that throughout our term, we are able to hold our reasons for running close to heart.”

Among Alimire and Vo’s top priorities will be advocating for the immediate needs of students adjusting to remote learning and new personal challenges.

“In the first few weeks of our term, we intend to strengthen mental health support not only in the clinical setting but also in the academic sphere,” Vo said. “Academic flexibility must be provided in these times as students juggle complicated situations in their personal lives.”

With the Stanford community so dispersed, Vo said it’s crucial that Stanford’s lines of communication remain strong, particularly between students and university administrators.

“As the administration works to adjust financial aid packages, housing cost, health insurance and more, we will work to communicate these changes in a clear manner to students, as well as relay student concerns to the administration,” Vo said.

Stanford student government and advocacy, Vo said, has been greatly impacted by such public health policies as social distancing. With students no longer able to meet in person, all ASSU meetings, including those hosted by the Senate, Executive Cabinet and Graduate Student Council, will be conducted virtually for the foreseeable future.

“Though we are met with these challenges, we are working hard to ensure that work from years past is not lost so that we can continue to build intergenerational movements,” Vo said.

Alimire and Vo won election unopposed; two challengers dropped out of the race before the election.

Alimire, who was not available for comment, is from Minnesota and spent part of her childhood in Kenya. At Stanford, she is majoring in urban studies and anthropology. This past year, she served as the ASSU’s Undergraduate Senate Chair.

Vo was born and raised in San Jose to Vietnamese refugees. At Stanford, she is majoring in human biology and double minoring in human rights and sociology. In addition to student government, she is involved in Stanford Taiko and the Weiland Health Initiative.

The ASSU offices are currently closed until Aug. 1, but representatives can still be reached through virtual office hours Monday through Friday. More details are available on the ASSU website.