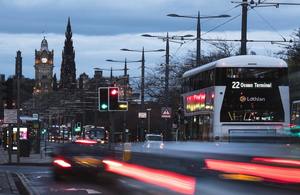 The UK Government has launched a new recruitment campaign which will encourage people in Scotland to apply for roles in the UK Civil Service.

Hundreds of new vacancies are live today, with roles at locations including Glasgow, Edinburgh and East Kilbride

The campaign, called ‘Closer to Home’, will run advertising across Scottish print media, billboards, bus and train stations and online.

The campaign underlines the UK Government’s commitment to Scotland and to ensuring the entire Union builds back better from the pandemic. The new roles will bring the heart of the UK Government closer to the communities it serves, facilitate greater collaboration with the Scottish local and devolved government as well as providing a boost to local economies.

Over 300 vacancies are currently live on the site, 30% of which are management positions and above. As the UK Government continues its levelling up agenda across all parts of the UK, hundreds more jobs are due to be posted over the remainder of the year.

Chancellor of the Duchy of Lancaster, Michael Gove, said:

“There is a huge array of talent in Scotland which for too long the UK Government has not made sufficient use of. It cannot be right that you have to move to London to pursue a career in one of Scotland’s governments.

“That is why we are moving more jobs – including senior jobs – to Scotland.

“We are opening up new long-term career opportunities to more people in order to enhance the Scottish voice at the heart of UK planning and decision-making.”

The roles being advertised include a broad range of functions and seniority, with positions available in a number of departments, including HM Revenue & Customs, Department for Work Pensions, Cabinet Office, Ministry of Defence, Home Office and the Foreign, Commonwealth & Development Office.

Applicants will have the opportunity to work across policy, operational delivery and digital, data and technology, and have access to development opportunities to build their careers.

The UK Government’s Places for Growth programme has already announced thousands of other Civil Service roles are being moved out of London to cities such as Belfast, Stoke and Edinburgh as part of the push to move government services closer to the public they serve.

Earlier this year, the Cabinet Office established a second headquarters in Glasgow.