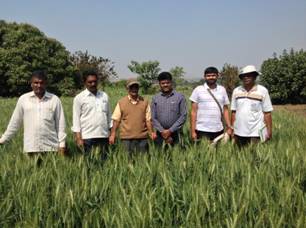 New Delhi: Farmers now have a wheat variety developed by Indian scientists with significantly high yield. The chapati from the flour of this wheat also scores high on quality.

This wheat variety called MACS 6478 and developed by Scientists from Agharkar Research Institute (ARI), an autonomous institute of the Department of Science and Technology (DST), Government of India, has doubled the crop yield for farmers in Karanjkhop, a village in Maharashtra.

The newly developed common wheat or bread wheat, also called high yielding Aestivum, matures in 110 days and is resistant to most races of leaf and stem rust. The amber colored medium sized grain contains 14% protein, 44.1 ppm zinc and 42.8 ppm iron which is higher than other cultivated varieties. A research paper on this variety has been published in ‘International Journal of Current Microbiology and Applied Sciences’.

The chapati quality of flour of this wheat is excellent, having score of 8.05 with good bread quality scoring 6.93. Maharashtra State seed agency for seed multiplication, ‘Mahabeej’ is carrying out certified seed production of MACS 6478 for use by farmers.

With the efforts of a former seed certification officer and support from ARI staff, so far 10 farmers of the village have cultivated this variety on fourteen acres of land. Farmers of Karanjkhop have planned to establish a company for further seed production and other agricultural produce.

“We needed one spark to motivate us and that is provided by ARI wheat variety MACS 6478. Now, we will never look back.” Mr. Ramesh Jadhav, a farmer, who witnessed all this change said.

Invention by students of IIT Madras, Cube – a compact assistive device that fits into a smartphone port to help the blind self-navigate through space, recognize people and objects as well as type, learn & read braille