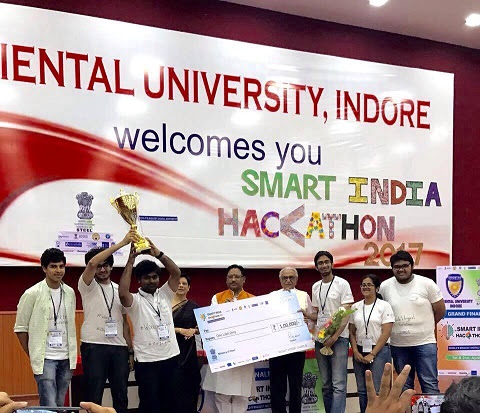 Chennai: Three teams from Next Tech Lab at SRM University’s Kattankulathur campus have won Smart India Hackathon 2017 organized by Government of India’s MHRD and AICTE. The hackathon is by far the biggest hackathon to be ever conducted in the world and is the starting point of Prime Minister Narendra Modi’s campaign for Digital India, Start-Up India and Make in India. About 29 ministries and government departments had identified 598 problem statements and the initial response for it came from over 7,500 teams with approximately 42,000 students. The Grand Finale of the hackathon was conducted across 26 states on 1st and 2nd April and saw around 10,000 selected students participating from various parts of the country.

Tesla, Minsky and Pausch Lab at Next Tech from SRM University were the teams that provided solutions to problem statements proposed by the Ministries of Steel, Tourism and Electronics & Information Technology. They competed against 50+ other teams in their assigned Ministries in three different locations – Cochin, Indore, Pune and raced to the top. Team Tesla and Pausch Lab at Next Tech emerged as Winners at compétitions held in and bagged Rs. 1 Lakh which was facilitated by Ministry of Steel’s Hon’ble Union Minister of State Shri Vishnu Deo Sai and Ministry of Tourism’s Smt. Meenakshi Sharma, (IA & AS) Addl. D.G. Team Minsky bagged the Innovation Prize of Rs. 10,000 from Persistent Systems at Pune.

Team Tesla’s which comprised of Soham Chatterjee, Archana Iyer, Rohit Saha, Fenil Doshi, Raghav Gupta and Karthik Suresh; problem statement was to create a mobile application platform that reduces power theft in the country. The team coupled the application with Artificial Intelligence to predict power theft locations and time. At the end of the 36 hour long hackathon, the team was able to develop a fully functional prototype of the user end mobile app and a highly sophisticated government sided software. The app had features that cater to the masses of India by integrating Aadhar card login and multilingual capabilities.

Pausch Lab at Next Tech which comprised of Naman Maheshwari, Amarnath Murugen, Siddharth Suresh, Vijayalakshmi Girijala, Farhan Ahmed and Zubin Datta Choudhary; problem statement was to provide a solution for commentary in Museums around India. Their product was a mobile application which integrated Mixed Reality along with commentary in multiple regional languages, which gave their idea an edge over the others. Not only did they provide a Minimum viable product at the end, but also a thoroughly researched profitable business plan.

Minsky Lab at Next Tech team included Rohan Pooniwala, Arjun Bahuguna, Sree Harsha Nelaturu, Aparna Krishnakuar, Tanmay Madaan and Sourav Sharan; problem statement was to create a Video Surveillance system with video analytics. The solution provided was in the form of an autonomous Deep Learning Surveillance system which used Convolutional Neural Networks to first filter out suspicious activities and then labels the crime or accident and automatically informs the relevant authority without anyone needing to manage it. A hardware solution where live footage is received and analyzed on the central server from the CCTV camera all over an area​. The solution provided was scalable and cheap when compared to present day methods as it can be deployed on already installed CCTV cameras without needing to change them.

The three team leaders Soham Chatterjee, Naman Maheshwari and Rohan Pooniwala along with their team belong to a student-run lab at SRM University called Next Tech Lab. Next Tech Lab was founded by Anshuman Pandey and Aditthya Ramakrishnan upon their return from USA after spending a semester at the Massachusetts Institute of Technology in February of 2016. The lab focuses on cross-disciplinary research in various fields spanning from Artificial Intelligence, Human-Computer Interaction and Internet of Things, Computational Biology to name a few. Members of the lab have won several national level competitions earlier, presented their research work at International Conferences and published in reputed journals. Recently Next Tech Lab started a fund raising campaign on Ketto and were able to reach 80% of their goal within two days.

After the competition was over, the teams were approached by the Ministries who were very impressed by their solutions and wanted to know how to scale these prototypes to serve the nation and its citizens. The lab plans to further continue its research in cutting edge technology for the benefit of the nation. SRM University is the only University to have won the most prizes at Smart India Hackathon 2017, thus setting a benchmark in India.

“The Jungle book brought to life at Greenwood High”