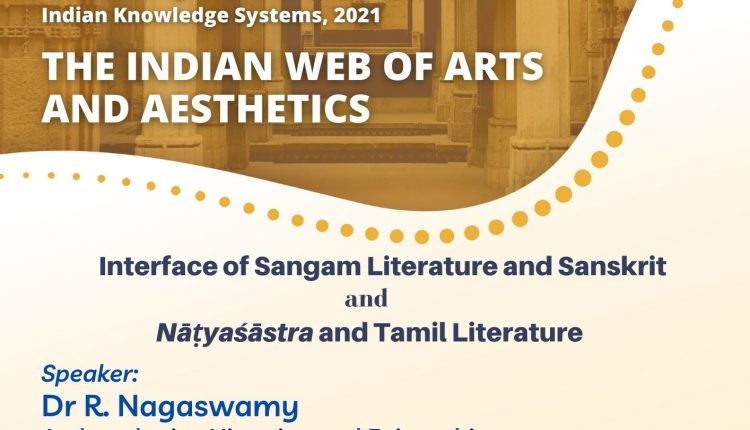 Well-known archaeologist, historian, and epigraphist Dr R Nagaswamy will deliver two lectures on February 24 and 25, 2021, from 3:05 to 4 pm

Gandhinagar: The next set of lectures in the fifth edition of the Indian Knowledge Systems (IKS) elective course at the Indian Institute of Technology Gandhinagar (IITGN) will introduce participants to the ‘Interface of Sangam Literature and Sanskrit’ and ‘Natyashastra and Tamil Literature’. Well-known archaeologist, historian, art historian, epigraphist, and expert of Sanskrit and Tamil classical literature Dr R Nagaswamy will deliver these lectures on February 24 and 25, 2021, from 3:05 to 4 pm (IST).

Dr Nagaswamy has made remarkable contributions to the disciplines of archaeology, history, art history, and epigraphy since the 1950s. He was the Founder-Director of the Tamil Nadu Archaeology Department and Vice-chancellor of Kanchipuram University. He has authored numerous books on the subjects, including Art and culture of Tamil Nadu, Vedic Roots of Hindu Iconography, Masterpieces of Chola Art, Thirukkural: An Abridgement of Sastras, Tamil Nadu: the Land of Vedas, among others. Dr Nagaswamy widely popularized archaeology, epigraphy and classical arts in Tamil Nadu, authoring in particular books for children, and founded the now famous Chidambaram Natyanjali Festival. He is the recipient of numerous awards, including the Kalaimamani (awarded by the Government of Tamil Nadu) and the Padma Bhushan (2018).

The first lecture — ‘Interface of Sangam Literature and Sanskrit’ — will explore the connection between the earliest extant Tamil literature, the collection called Sangam poems, and Sanskrit. “Sangam” in Tamil refers to an assembly of scholars/poets who gathered when new poetry was presented for assessment to be awarded classical status. According to tradition, there were three such assemblies, but all the available Tamil poems belong to the last Sangam. There are 2500 poems altogether, sung by over 200 poets, of whom nearly 60 poets and more bore Sanskrit names like Bharadvaja, Gautama, Valmiki, Damodara, Kapila and so on. Dr Nagaswamy will also throw light on various groups and divisions of the Sangam poems, how the references described in these poems have their roots in northern India, and how their Sanskrit connection contributed to Tamil grammar, poetry, music, dance, and religious philosophy.

The second lecture — ‘Natyashastra and Tamil Literature’ — will discuss the significance of Sanskrit text Natyashastra as a great scientific treatise on dance, poetry, costumes, construction of theatre, dialogue, the aesthetics of enjoyment, music, musical instruments, use of Sanskrit, Prakrit, other regional languages, and so on. Dr Nagaswamy will document the influence of Natyashastra on Tamil literature, especially on the early grammatical text Tolkappiyam, composed by Tolkappiyam, a disciple of sage Agastya.