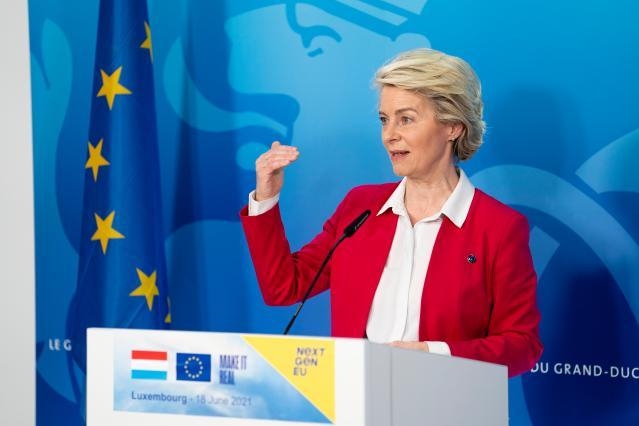 The RRF – at the heart of NextGenerationEU – will provide up to €672.5 billion (in current prices) to support investments and reforms across the EU. The Luxembourgish plan forms part of an unprecedented coordinated EU response to the COVID-19 crisis, to address common European challenges by embracing the green and digital transitions, to strengthen economic and social resilience and the cohesion of the Single Market.

The Commission assessed Luxembourg’s plan based on the criteria set out in the RRF Regulation. The Commission’s assessment considered in particular whether the investments and reforms set out in Luxembourg’s plan support the green and digital transitions; contribute to effectively addressing challenges identified in the European Semester; and strengthen its growth potential, job creation and economic and social resilience.

The Commission’s assessment finds that Luxembourg’s plan allocates 61% of total expenditure to measures that support climate objectives. This includes measures to supply renewable energy to a housing district project in Neischmelz, a support scheme for the deployment of charging points for electric vehicles, and the “Naturpakt” scheme encouraging municipalities to protect the natural environment and biodiversity.

The Commission finds that Luxembourg’s plan devotes 32% of total expenditure to measures that support the digital transition. This includes investments in the digitalisation of public services and procedures; digitalisation of projects for healthcare, such as an online solution for remote healthcare checks; and the establishment of a laboratory for testing ultra-secure communication connections based on quantum technology. In addition, investments in targeted training programmes will provide job seekers and workers on short-time work schemes with digital skills.

The Commission considers that Luxembourg’s plan is expected to contribute to effectively addressing all or a significant subset of challenges identified in the relevant country-specific recommendations (CSRs). Specifically, it contributes to addressing CSRs on labour market policies through addressing skills mismatches and enhancing the employability of older workers. It also contributes to increasing the resilience of the healthcare system, increasing available housing, the green and digital transitions, and the enforcement of the anti-money laundering framework.

The plan represents a comprehensive and adequately balanced response to Luxembourg’s economic and social situation, thereby contributing appropriately to all six pillars of the RRF Regulation.

Luxembourg’s plan proposes projects in five European flagship areas. These are specific investment projects dealing with issues that are common to all Member States in areas that create jobs and growth and are needed for the green and digital transitions. For instance, Luxembourg has proposed measures aimed at increasing the effectiveness and efficiency of public administration service through enhanced digitalisation.

The assessment also finds that none of the measures included in the plan significantly harm the environment, in line with the requirements laid out in the RRF Regulation.

The control systems put in place by Luxembourg are considered adequate to protect the financial interests of the Union. The plan provides sufficient details on how national authorities will prevent, detect and correct instances of conflict of interest, corruption and fraud relating to the use of funds.

Members of the College said:

President Ursula von der Leyen said: “Today, the European Commission has decided to give its green light to Luxembourg’s recovery and resilience plan. The plan places a strong emphasis on measures that will help secure the green transition, demonstrating Luxembourg’s commitment to creating a more sustainable future. I am proud that NextGenerationEU will play an important role in supporting these efforts.”

Valdis Dombrovskis, Executive Vice-President for an Economy that Works for People, said: “Congratulations to Luxembourg for designing a recovery plan whose focus on the green and digital transitions goes way beyond the minimum requirements. This will make a significant contribution to Luxembourg’s recovery from the crisis, promising a brighter future for its young people by investing in digital skills programmes, training for jobseekers and the unemployed, as well as increasing the supply of affordable and sustainable housing. These investments will make Luxembourg’s economy fit for the next generation. It is also good to see Luxembourg’s plans to invest in renewable energy and further digitalise its public services – both areas with potential for solid economic growth.”

Paolo Gentiloni, Commissioner for Economy, said: “Although its financial contribution is relatively limited in size, Luxembourg’s recovery and resilience plan is set to deliver real improvements in a number of areas. Particularly positive is the strong focus on supporting the Grand Duchy’s climate transition, with important measures to encourage the take-up of electric vehicles and increase energy efficiency in buildings. Citizens will also benefit from the drive to boost digital public services and provide more affordable housing. Lastly, I welcome the fact that the plan includes significant steps to further reinforce the anti-money laundering framework and its enforcement.”

The Commission has today adopted a proposal for a Council Implementing Decision to provide €93 million in grants to Luxembourg under the RRF. The Council will now have, as a rule, four weeks to adopt the Commission’s proposal.

The Council’s approval of the plan would allow for the disbursement of €12 million to Luxembourg in pre-financing. This represents 13% of the total allocated amount for Luxembourg.

The Commission will authorise further disbursements based on the satisfactory fulfilment of the milestones and targets outlined in the Council Implementing Decision, reflecting progress on the implementation of the investments and reforms.