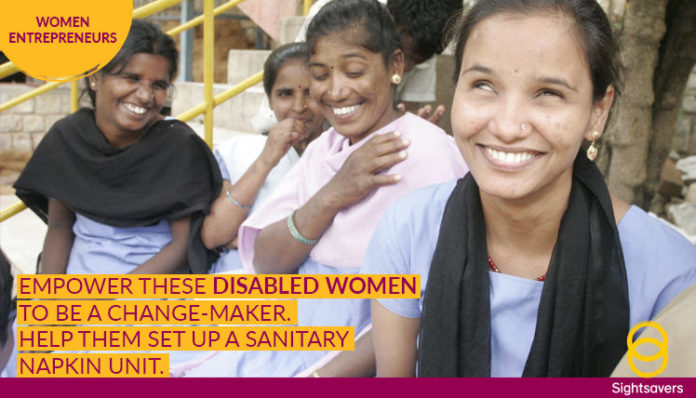 New Delh: As a part of the Government of Odisha’s initiative to promote self-reliance and economic independence among the visually-impaired women of the Gajapati district, a Sanitary Napkin Unit has been proposed to be set up. This unit will be operated and marketed by the self-help group members of ‘Persons with Disabilities’ in cooperation with ICDS and the district health department. A fundraising campaign is live for the project on the online crowdfunding platform, Ketto. The campaign, which is live till 25 August 2017, has so far raised INR 12,000 of the goal of INR 9,00,000, with the aid provided by 14 supporters.

Women in Odisha’s Gajapati district fight multiple demons every day, and visual impairment is just one of them. Some other factors conspiring against these women are poverty, lack of access to livelihood options, and social exclusion as well. The women, however, exhibit unparalleled tenacity against these hurdles, and barely allow sight impairment to impede their ambitions.

A simple donation can light up someone’s life, both literally and figuratively. Every rupee donated to said cause helps prevent avoidable blindness and rehabilitate people with irreversible blindness. There are sight-threatening conditions, such as cataract, trachoma and glaucoma which can lead to total blindness if left untreated.

There is a comprehensive understanding of the allied causes of blindness – it is more than just the eye diseases that cause it. It is, among other factors, poverty, lack of access to resources/information, and social exclusion. Sightsavers, an NGO in India, enables the deprived to get access to preventive, curative and rehabilitative services without facing any financial hardships. It is constantly working to bridge the gap of information, knowledge, resources, accessibility and affordability for the people in need.

The idea of setting up a sanitary napkin unit, operated by women with disabilities, serves a multitude of purposes – it boosts their entrepreneurial skills; enables them to have access to resources related to female hygiene; and helps them secure economic self-reliance. Supporting multiple noble causes has never been easier, and it’s not too late to get involved. The fundraiser provides the cause with the support it deserves and needs.