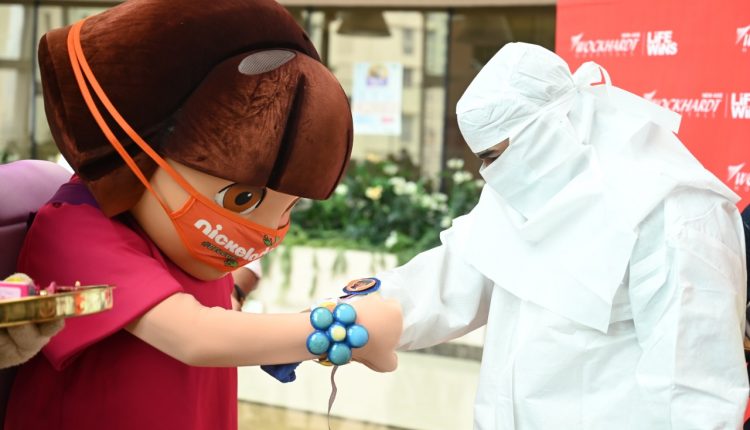 Nickelodeon is back with its Surakshabandhan Campaign; Gives A Heart-Warming Tribute to Medical Personnel at Wockhardt Hospital, SoBo

~In association with Slam Out Loud, kids from Swadhar curate handmade rakhis and gratitude notes for healthcare workers~ ~Nicktoons Shiva, Dora, Happy & Pinaki gave a heart-warming tribute to the medical staff at Wockhardt Hospitals and tie handmade rakhis made by children ~

Mumbai: The Nickelodeon franchise entertains millions of young fans across India and continues to inculcate right values in kids by breaking stereotypes and redefining norms through their shows and initiatives. Being a pioneer in bringing alive the true spirit of Rakshbandhan, country’s leading kids’ entertainment channel is back with its iconic campaign – Surakshabandhan – to celebrate and recognize the selfless efforts of healthcare workers across the country.

A few days ahead of the festival, in an effort to pay tribute to the medical personnel and show gratitude, Nickelodeon joined hands with Slam Out Loud, a Delhi-based not-for-profit organisation to curate DIY Nickelodeon-themed rakhis for the healthcare workers and recognize their selfless service. As part of the initiative, Slam Out Loud, an organisation that uses the power of arts to build creative confidence amongst children from disadvantaged communities, conducted a 1-hour workshop with 40 kids from Swadhar (Pune) to make their favourite Nicktoon-themed handmade rakhis. The kids also wrote heart-warming gratitude notes and cards for the medical personnel thanking them for their work and praying for their safety. Nicktoons Shiva and Rudra became the messengers of ‘thank you’ and tied rakhis to the medical staff at Wockhardt Hospitals to show love, respect, and gratitude. Through this initiative, Nickelodeon set out to create awareness amongst children on the selfless efforts of healthcare workers and how they have been pushing the envelope to keep everybody safe and protected. The doctors and nurses who received the rakhis were really touched by the gesture.

Dr Parag Rindani, Regional Head, Wockhardt Hospital said, “We are glad to associate with Nickelodeon to tie Rakhi – a band of Suraksha to our doctors and the clinical staff for their remarkable contribution during these trying times and to celebrate the true spirit of “Surakshabandhan” during the ongoing pandemic. We hope that this activity will relieve stress, fear and divert the attention of our Doctors and medical staff who are protecting us ever since the pandemic hit us.”

The initiative will be promoted on digital media and through a robust program of mommy networks and influencers who will amplify the reach to audiences at large. Moreover, the initiative will be brought to life on social media through engaging content and contest for kids encouraging them to share pictures of their DIY rakhis. Additionally, the brand is imploring kids to create a chain of messages for the medical personnel and curate the longest rakhi message using social media features.

In 2017, Nickelodeon celebrated Surakshabandhan with India’s elite Border Security Force (BSF) at Wagah Border, wherein children along with their favourite toons Dora and Shiva tied the symbolic Rakhi to the soldiers at the iconic retreat ceremony, thus saluting their selflessness, bravery, and relentless commitment to the country.