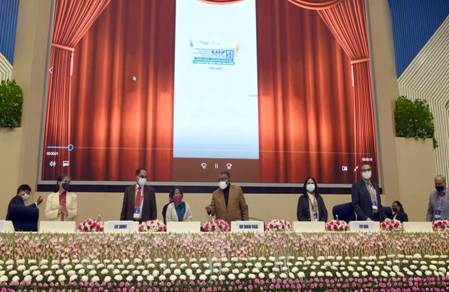 Speaking on the occasion Shri Ravi Shankar Prasad said, “Technology is an enabler, a facilitator, and it empowers. Digital India is a movement to empower ordinary Indians with the power of technology. It bridges the digital divide and brings in digital inclusion and must be achieved with the technology that is homegrown, developmental, and inclusive.”

He further added, “This movement of low-cost technology being produced by Indian entrepreneurs, the Government and the private sector was the reason as to why we could grow the Made in India vaccine in the fight against Corona. Made in India 5G should be our ambition and on the 25th anniversary of NICSI, I urge all the private sectors including other operators and NICSI to rise to the occasion to understand, adopt and innovate the emerging counters of IT Technology. I vision India as the topmost country in the world as a Data Economy and NICSI shall play an important role. The kind of humongous data we are going to generate is going to become the facilitator, accelerator of the Data Economy. Many African countries like to know more about Digital India and low-cost technological solutions where NICSI can chip in.”

Shri Ajay Sawhney, Secretary (MeitY) highlighted the significant milestones of NICSI and said,“NICSI has been a great support for Ministries, Departments and State Governments in providing all kinds of softwares and services. Over a period, NICSI has also diversified into National Scale Data Centres. We have implemented many eGovernance projects with NICSI, and harmonizing them into National Public Digital Platform is the next wave to embark upon.”

Dr. Rajendra Kumar, Additional Secretary (MeitY) and Chairman, NICSI lauded the efforts of NICSI and presented the roadmap ahead. He said, “NICSI has emerged as a premier IT organization at the Centre and State Government level. We are pushing in major efforts with NIC, NICSI, and other stakeholders to put in a new architectural framework for the entire eGovernance known as India Enterprise Architecture. Its second version is now being formulated. Today as a country, we are standing at the cusp of another transformation. We all can play a stellar role in achieving the goal of making India a 1 trillion digital economy in the next five years. I am hopeful that my team at NICSI and NIC will contribute to this vision.”

Dr. Neeta Verma, Director General, National Informatics Centre, congratulated NICSI and said, “NICSI was established as a project execution arm of the Government and it is very heartening to see that it has transformed its business model from desktop and servers to cloud-based services now. With the support and partnership of NICSI, we will be able to extend our support to many more institutions across the country. We plan to extend the use of eOffice which is currently being used by 600 different institutions; eHospital being used by 300+ hospitals; and eProcurement platform that publishes 1lakh plus tenders each month; to Public Sector Units and to academic institutions now.”

TEJAS – The visual intelligence tool, through the collaborative effort of NIC and NICSI (CEDA), is completely developed in-house using open source technologies and bringing together the best features comparable to market leading BI tools. The tool would be primarily used by Government Departments at various levels in the centre and state. It will provide State-of-the-art and powerful data analysis for officials to design analytical reports and turn data into accurate analysis and smart visualizations.

e-Auction India –It caters to the electronic forward and reverse auction requirements of the Government departments and organizations. It aims at transparency and non-discrimination amongst bidders, by allowing free access to auction documents, clarifications, online submission of quotes from any place on 24×7 basis, in a secured environment, adopting industry standard open technologies.

Work from AnyWhere Portal – WAW (Work from AnyWhere) Portal will ease and enhance accessibility of key applications to the Government employees.WAW portal is built upon core workplace experience and creates a highly extensible environment for users to dynamically adapt to changing needs. The virtual work environment, provisioned by WAW portal, will empower employees with all the key resources enabling them to access organizations’ applications and data and communicate with fellow officials. With the following objectives to achieve, WAW portal will facilitate quick transition to remote workplace environment, while maintaining secured access to departmental applications.

Shri C. P. Gurnani, CEO, Tech Mahindra India talked about the role of IT in New India’s Innovation Ecosystem and Ms. Debjani Ghosh, President, NASSCOM virtually highlighted the role of IT in the Enablement of Atmanirbhar Bharat.

The event also witnessed few panel discussions highlighting the role of NIC and NICSI at the forefront of the Digital-led fight against COVID-19, a session on role of Public Digital Platform in delivering Next-Gen Public Services and the role of Emerging Technologies in Digital India.

Shri Prashant Kumar Mittal, Managing Director, NICSI, delivered the vote of thanks to all the dignitaries, guests, members and participants for their support. He assured the Minister that in coming days, NICSI will work towards an Aatmanirbhar Bharat.