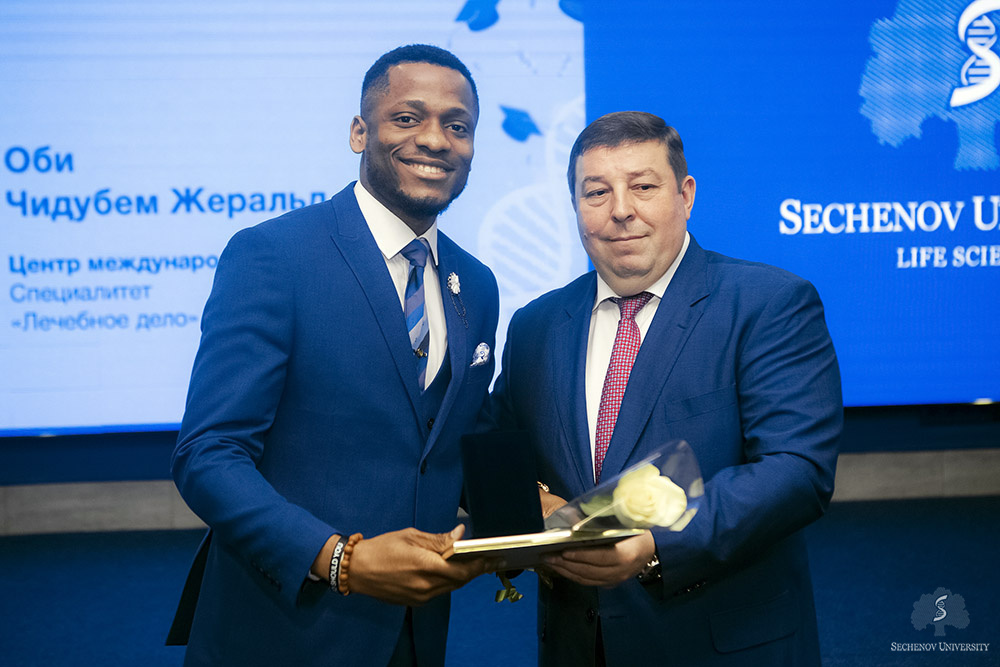 Dr Obi Gerald, 26, is from the Anambra State, Nigeria. Before coming to Sechenov, he was attending a medical university in his home country and was the best graduating student from his high school days. Later, he received a scholarship from the Federal Government of Nigeria to study abroad. He chose Sechenov University because of its reputation as the leading medical school in Russia. Gerald says that, in his opinion, one of the most challenging tasks was to learn Russian, as it is the official language of instruction, but he mastered it.

Gerald decided to become a doctor at a very young age. The death of his younger brother from congenital heart disease was the critical point that made him think about his future career. Gerald says Nigerian healthcare is not as experienced and efficient as the healthcare in the developed world and hopes to make an impact by using his knowledge and inspiring others.

According to Dr Obi Gerald, numerous opportunities are available at Sechenov University to receive the best medical education. He especially notes the extensive training by professors and doctors, access to an e-library, and involvement in research — students are usually expected to work as research assistants or nurses. Gerald’s laboratory and clinical work has resulted in a number of research papers in international scientific journals; he also participated at conferences in Russia, America, and the UK. After a clinical residency, Dr Obi Gerald wants to be a cardiothoracic surgeon.

Gerald found himself in a very good student community at Sechenov. He participated at sporting events, worked for the International Student Union, and co-operated with the First Med media team as a photographer. He also served as an English tutor at the Sechenov English Club.

Dr Obi Gerald has actively volunteered at local and international events. He particularly notes his experience in the World Festival of Youths and Students in 2017 where nearly 30,000 international students gathered in the city of Sochi,. He worked with the protocol team as a translator, assisted the VIP guests and dignitaries. Chidubem also volunteered at the 2018 FIFA World Cup during the games in Moscow. More recently, he has been helping the patients with severe COVID-19 at the Sechenov University Second Teaching Hospital.

Sechenov University is committed to recruiting the best students from across the globe and encourages their efforts with attractive scholarships.