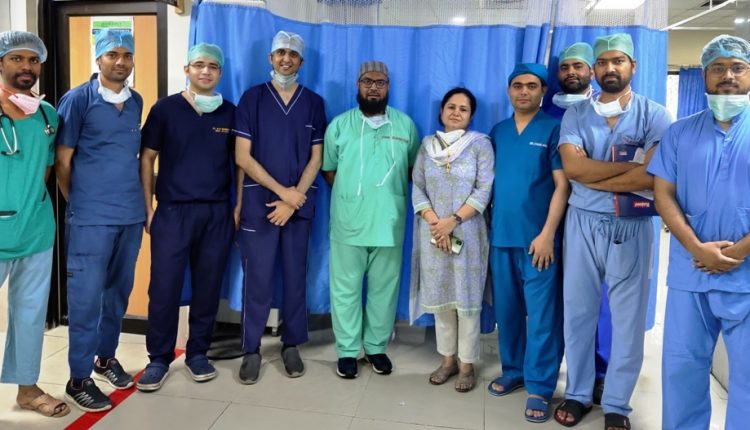 Aligarh : A Nine-year-old resident of Gabhana district in Aligarh, Navneet, diagnosed with a leaky Mitral valve, affecting the normal blood flow through his heart has fought the cardiac problem and swung back to life. He has come out of the intensive care unit, and is making steady progress after a critical battle.

Navneet could have started to show symptoms of congestive heart failure, but thanks to the team of cardiothoracic surgeons at the Jawaharlal Nehru Medical College (JNMC), Aligarh Muslim University (AMU); the child has undergone a successful free-of-cost valve repair under the Rashriya Bal Swasthya Karyakram (RBSK) scheme of the Government of India.

He added: “We decided to repair the valve as it is not possible to do a valve replacement on a nine-year-old child”.

PG College Rajouri hosts webinar on life and works of…

Speaking after the procedure, the surgeons said that the valve repair is a challenging operation with high risks and very few government hospitals perform such surgeries. Before JNMC surgeons started performing these complicated surgeries, people in the nearby areas of Aligarh had no options but to reach centres such as AIIMS New Delhi and SGPGI Lucknow,

He said, “The patient was rushed to JNMC by his parents after suffering shortness of breath. Navneet’s parents had consulted many physicians as his condition had become a major hindrance in daily activities”.

Congratulating the surgical team, AMU Vice Chancellor, Prof Tariq Mansoor said that even during the pandemic, JNMC surgeons and doctors have stood firm in their promise to help every patient, including some of the most complex and acute pediatric cases from various parts of the country.

He added that life-saving surgeries are being done regularly in JNMC and more than 50 lifesaving cardiovascular surgeries have been done since April lockdown in the Department of Cardiothoracic Surgery.

Prof Rakesh Bhargava (Dean, Faculty of Medicine) and Prof Shahid Ali Siddiqui (Principal, JNMC) said that patients from all across Uttar Pradesh and other parts of the country prefer JNMC for its advanced medical infrastructure, better communication, and easy access for follow-up visits.

AMU Faculty delivered a session at FDP organised by NIT