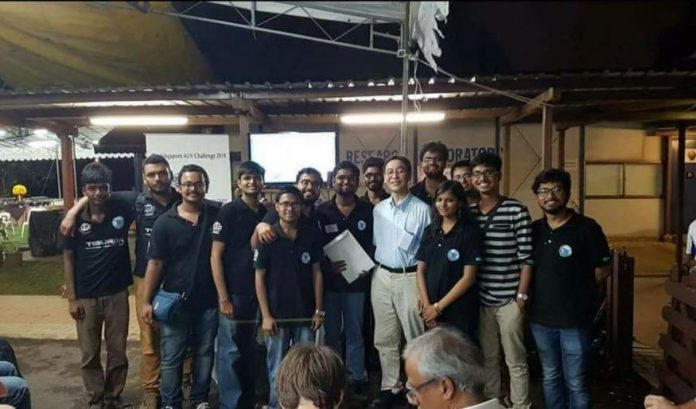 Rourkela : Team Tiburon, a robotics team from National Institute of Technology Rourkela, has won the First Prize at the National Students’ Autonomous Underwater Vehicle (SAVe) Competition 2019 jointly with Indian Institute of Technology, Bombay.
ESSO-National Institute of Ocean Technology (NIOT), under the Ministry of Earth Sciences has organised the Sixth National Student Autonomous underwater Vehicle Competition for students pursuing engineering degree to visualize and design an autonomous underwater vehicle. The main focus of this competition was to involve students on the new frontier areas of ocean technology and kindle their innovative thinking in this unexplored area of ocean environment and observation. NIOT would support the winning team of the National Competition SAVe 2019, by sponsoring any two members of the team to participate in the International competition being held annually in AUVSI foundation San Diego, USA during July 2019.
Out of several participating teams from various institutes in the country, 11 teams had qualified to perform on the main arena at IIT Chennai. The competition required the vehicle to perform several tasks autonomously such as following colored paths, crossing L-shaped gate, dropping ball on ‘X’ or ‘O’ marked bins, shooting torpedoes inside heart-shaped cupids and finally surfacing inside hexagonal shaped pipes indicating end of the run.
Founded in 2014, Team Tiburon is a multidisciplinary team of undergraduate students working under the guidance of Professor Haraprasad Roy from the Department of Mechanical Engineering, and is dedicated towards developing Autonomous Underwater Vehicles for competitions and research. Previously, the team won the Second prize at the International Singapore Autonomous Underwater Vehicle Challenge (SAUVC) 2018 organized by IEEE Oceanic Engineering Society, Singapore Chapter and Third Prize at the national level SAVe 2017, organized by NIOT, Chennai and IEEE-OES. The team is working to develop the mechanical and electrical design of the vehicle, as well as the intelligent software required for autonomous operation. It currently consists of 22 members, and is supported by the NIT Rourkela Alumni Association, Intel and Solidworks.