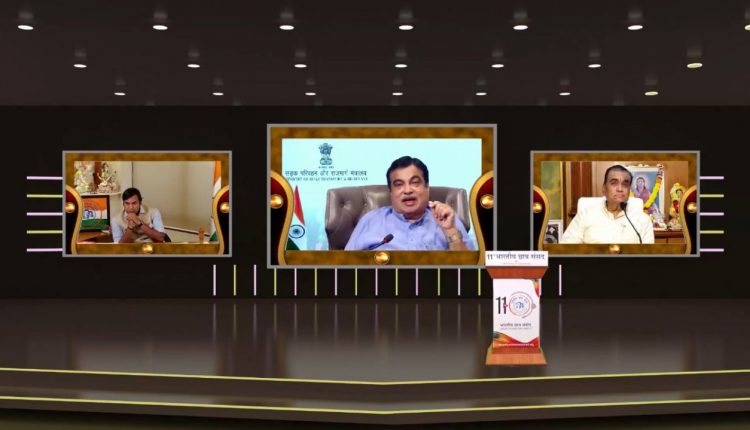 More than 15000 students registered for BCS from across the country and tuned in for the mega inauguration to witness some of the most inspirational political thought leaders of the country.

New Delhi: With the vision of creating Ethical, Spirited and Committed Political Leadership for the country from the grassroots and from all walks of life, MIT School of Government (MIT-SOG) commenced a six-day virtual Annual National Conclave, Bharatiya Chhatra Sansad or BCS (Indian Student Parliament) on 23rd September 2021. Shri. Nitin. Gadkari, Hon’ble Minister of Road Transport and Highways, Govt. of India and Shri. Parshottam Rupala – Hon’ble Union Minister for Fisheries, Animal Husbandry and Dairying, Govt. of India were the Chief Guests along with many other eminent dignitaries who enlightened the students with their visionary thoughts about students and politics.

Shri Parshottam Rupala, Hon’ble Union Minister for Fisheries, Animal Husbandry and Dairying, Govt. of India said, “The holistic approach of all the students should be towards making India a global leader. A common man rises up and leads the nation, this is one of the major feats of a democratically developed nation like India. Self-Reliant India is not only a thought or an idea but is a dream of every citizen who envisions her brighter future”.

Shri Rahul V. Karad, who is also the Founder and Chief Patron of Bharatiya Chhatra Sansad said, “India is the spiritual capital of the world, we have always been liberated. We Indians are original thinkers. We must practice to ‘Be the change we wish to see in the world today’. Educated people must enter into politics.”

Ramesh Bais, Hon’ble Governor of Jharkhand gave the presidential address and emphasised that the youth of the country should be actively involved in its political and social development . Not only GDP but GHD “Gross Domestic Happiness” should be our primary focus.

Over the past ten years , BCS has witnessed the participation of over 80,000 students and more than 300 distinguished dignitaries, guest speakers and thought leaders.

The theme of the post-inaugural session was Leadership Lessons: Nehru to Modi, which depicted how leadership has changed hands from leaders like, former Prime Minister Shri Jawahar Lal Nehru to the Hon’ble Prime Minister Shri Narendra Modi, and the significance of the lessons learned. It focused on the challenges faced and the changes which came at different levels of leadership. The session further captured how significantly the Indian economy has transformed under our various leaders. It also touched upon the different levels of democracy and how each level had its own significance in shaping the outline of an empowered India.

With Shri Gadkari’s inspiring speech on ‘Politics is an instrument for socio-economic reform’, the day concluded with the gratitude expressed by Shri. Rahul.V. Karad and Shri Vishwanath. D. Karad.

MIT, US Space Force to explore opportunities for research and workforce development