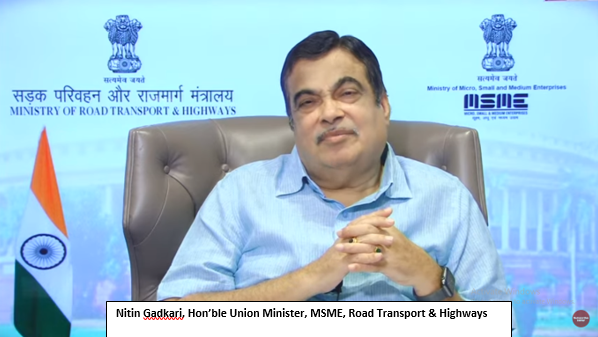 New Delhi: Union Minister Nitin Gadkari will take the centre stage to share his insight on the role of leadership in turbulent times at Dr. Rajaram Jaipuria Memorial Lecture 2020 on December 5.

The topic for this year’s lecture is quite apt: Role of Leadership in Turbulent Times. Gracing the event as Chief Guest and speaker will be Nitin Gadkari, who has had an illustrious political career through which he has performed a variety of leadership roles. Presently, Gadkari is Minister for Road Transport & Highways, and Minister for MSMEs in the Government of India.

The 45-minute event will begin with an invocation song by the folk singer Malini Awasthi, a Padma Shri winner. This will be followed by a welcome address by Shishir Jaipuria, chairman of Seth Anandram Jaipuria Educational Society (SAJES). Thereafter, a Green Certificate will be handed out to Gadkari by Yash Jaipuria, member of SAJES. The certificate is the result of a great initiative of planting 501 trees spearheaded by the Jaipuria Group.

The keynote address by Gadkari on ‘The Role of Leadership in Turbulent Times’ will last half an hour, following which the event will conclude with a vote of thanks by Saket Jaipuria, Vice President, SAJES.

The virtual lecture will be attended in large numbers by the students, teachers, principals, and faculty members of Jaipuria Group of Educational Institutions. Government officials, corporate houses and entrepreneurs have also been invited and are likely to attend online.

This shall be the second Dr. Rajaram Jaipuria Memorial Lecture to be organized by Jaipuria Group. The first lecture was held in 2019 and had Vice President Venkaiah Naidu as the chief guest.

You can watch Nitin Gadkari’s speech on ‘The Role of Leadership in Turbulent Times’ at www.FB.me/SethAnandramJaipuriaSchoolGhaziabadand www.youtube.com/jaipuriaghaziabad on December 5 at 5.30 pm.