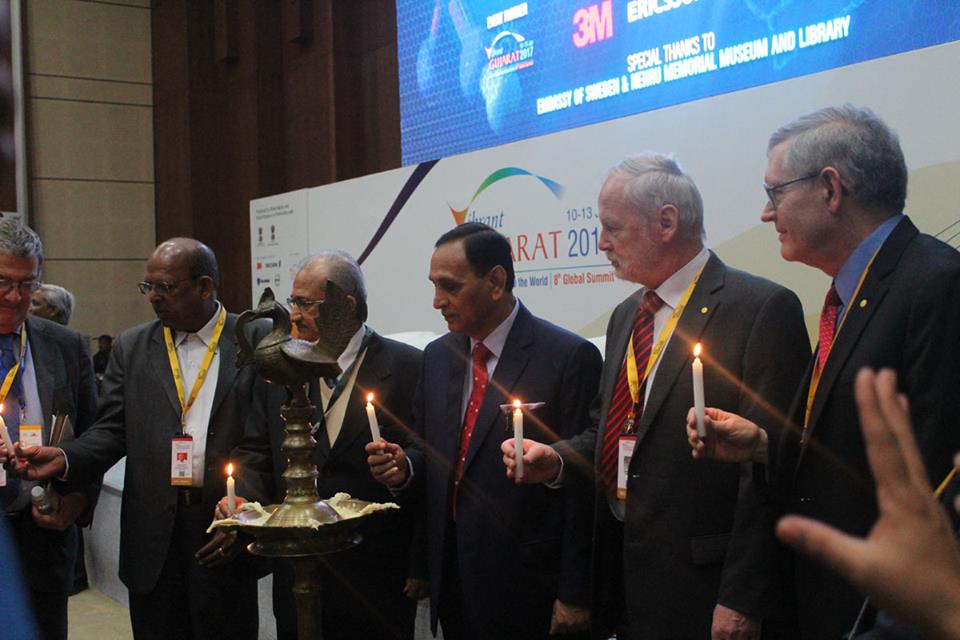 Nobel Laureates Engage In A â€˜Nobel Dialogueâ€™ at Vibrant Gujarat

By India Education Diary Bureau Admin Last updated Apr 23, 2020
Share
Gandhinagar: As part of the Vibrant Gujarat Global Summit 2017, today, a session with nine Nobel Laureates was conducted at Mahatma Mandir, Gandhinagar. The Nobel Dialogue was organizedunder the tripartite MoUsigned by Nobel Media AB(Sweden); the Government of India (Department of Biotechnology of the Ministry of Science and Technology); and the Government of Gujarat (Department of Science & Technology Department).
Apart from the Nobel Laureates, the Dialogue was also attended by eminent scientists, dignitaries from the state and central governments, industry leaders and students. The Nobel Laureates included Dr. Venkatraman Ramakrishnan, the Indian origin winner of the Nobel Prize for Chemistry in 2009; Dr William E. Moerner (Chemistry, 2014), Dr. Ada Yonath, (Chemistry, 2009)and Dr. Randy Schekman, (Medicine, 2013).
Other Nobel Laureates who participated in the sessions wereDr. Richard J Roberts (Medicine, 1993), Dr. Harold Varmus (Medicine, 1989), the2004 Nobel Prize Winner in Physics Dr. David J Gross – also a member of the Indian Academy of Science; 2012 Nobel Prize Winner in Physics Dr. Serge Haroche; and Prof. Dr. H.C. Hartmut Michelwho received the 1988 Nobel Prize in Chemistry.
Shri Dhananjay Dwivedi, Secretary, Department of Science & Technology, Government of Gujarat, said “The Nobel Dialoguewas the first time multiple Nobel laureates spoke under the same roof. We are positive that this initiative, in continuation with Nobel exhibition yesterday, will inspire thousands of young students and researchers and will drive innovation in science and technology, further fuelling the growth of Gujarat and the nation. We were absolutely privileged to have the Nobel laureates enlighten us with their perspectives on research and its potential impact on human society.”
The Nobel Laureates participated in two panel discussions and shared their thoughts on the below topics-
1. ‘Basic or Applied Research – Fostering an innovative environment’ and
2. ‘Local research, global impact: Addressing global challenges’
Related Posts

Oct 26, 2021
In the first session, there was a clear consensus among the Nobel laureates that there isn’t a real diiference between basic and applied research. What really mattered was whether the research being conducted is of high quality and is intended to serve a good purpose.
Dr. Venkatraman Ramakrishnan was of the view that Indian biomedical researchers have a great opportunity to research on India-specific issues. He urged that with 25 million new students entering the educational ecosystem in India annually, India needs to invest heavily in building educational infrastructure. He also said that microbial pathogenesis, genome, vaccine development are areas India should focus on as there is a lot of scope for meaningful research here.
Dr. David Gross opined that curiosity-driven research works better in the long run as nature is cleverer than human beings. This is in contrast to applied research that is often demanded by human society which is focused on short-term outcomes. India has the potential to become a leader in large science projects Science globally given its economic growth rate and strong leadership but it needs heavy investments in Science & Technology.
Dr. Richard Roberts urged India to take advantage of genetically modified (GM) crops as it will help to raise incomes of lakhs of farmers and help combat hunger. Citing the successful adoption of BT Cotton in India, he stressed on the need for a grassroots campaign to build awareness about GM crops in India.
Dr. Randy Schekman felt that there is a strong need to encourage research by enabling access and exposure to scientific laboratories at undergraduate level itself. He also spoke about the need for India to integrate research centres with university education.
Share FacebookTwitterGoogle+ReddItWhatsAppPinterestEmail