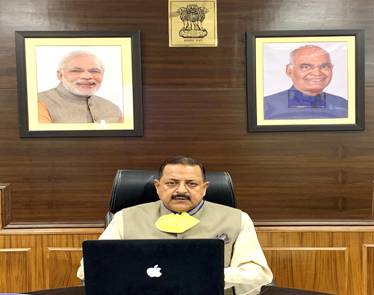 New Delhi: Union Minister of State (I/C) for Development of North Eastern Region and Minister of State in Prime Minister’s office, Dr. Jitendra Singh said here today that North Eastern Region of the country is slowly but firmly coming up as new business destination of India. New paradigms will emerge post-COVID, with a potential for new breakthroughs in economy, trade, scientific research and several other diverse areas, catapulting North East as the economic hub of the country and a preferred destination for Startups.

Inaugurating e-Symposia 2020 organised by Dr. APJ Abdul Kalam Centre for Policy Research& Analysis and IIM Shillong as Chief Guest today through Video conference, Dr. Singh said, in the last six years, under the Modi government, the North Eastern Region had made up for several lapses of the past because for the first time the region received equal attention at par with the other regions of the country. This has not only instilled confidence among the people but also raised the capacity to engage with other parts of India as well as the countries outside, at different levels.

Lamenting the lack of interest of the successive governments towards the comprehensive development of region in the past, Dr Singh highlighted the initiatives taken by this government for the comprehensive and holistic development of this region. Be it overcoming the connectivity issues or encouraging enterpreneurship in the region, this government is fully committed to provide all posssible assistance and support.

As can be seen, in the last six years, there has been a significant development in terms of Road, Rail and Air connectivity, helping facilitate the movement of goods and persons not only across the region but also across the country. States Like Arunachal Pradesh and Meghalaya which had not seen Railways hitherto are now connected with Railways. Similary States like Sikkim has seen an Airport for the first time. Other States are also witnessing the opening of new ports or augmenting the facilities and capacities of the existing ones. He further said that the Indo-Bangladesh treaty for exchange of enclaves, which was accomplished under the leadership of Prime Minister Narendra Modi, has cleared the decks for ease of business, ease of movement and ease of commuting, which was earlier a tedious task. Very soon we are also going to have a train to Bangladesh from Tripura heralding a new chapter and opening new vistas in the development of this region by providing the entire region access to the seaports. Needless to say, this will boost the trade across the borders especially with our eastern neighbours by leaps and bounds. The Government has also come up with a new scheme called “North East Road Sector Development Schemes” (NERSDS) for development and proper maintenance of inter states roads within the region, which has colloquially acquired the name of ‘Orphaned Road’ because of its persistence neglect by both the connecting states. The list of initiatives, to say the least, is unending. Suffice to say, it only underlines in bold the resolve and commitment of this government to accord highest priority to the all round progress of this region.

On the other hand, the government and the Ministry of DoNER is also committed towards promoting self help groups by encouraging livelihood projects to provide sustainable income to the most needy group of people, especially to the women folk who by tradition are quite industrious in this part of the country. Desired impetus has also been accorded to the projects in areas like Horticulture, Tea, Bamboo, Piggery, Sericulture, Tourism etc. In the emerging scenario, Dr. Singh said, Bamboo from the North East is going to be an important vehicle of trade not only for India but also for the entire subcontinent.

Sensing this opportunity, the Government has amended the century old Forest Act by taking home grown bamboo out of the purview of the Forest Act. In the present scenario, Tourism in the region is going to get a major boost because of its picturesque location and landscape, attracting tourist hitherto going to European destination. The Government has also encouraged local entrepreneurship by providing venture funds to the prospective entrepreneurs and facilitating investment; domestic as well as foreign by friendly countries, in the region.

While the government can play an enabling role, Dr Jitendra Singh urged the institute like IIM Shillong to frame policies and guide the governments, Central as wells as States, for the holistic development of the region. Prior to Dr. Singh, Secretary DoNER Dr. Inderjit Singh, Secretary NEC Mr Moses K Chalai, Chairman, Board of Governors, IIM Shillong Shri Shishir Bajoria, Member Board of Governors, IIM Shillong Shri Atul Kulkarni, Director IIM Shillong Prof. D P Goyal and Prof Keya Sengupta also spoke on the occasion underlining the scope and need for strategic and development imperatives in the Region.