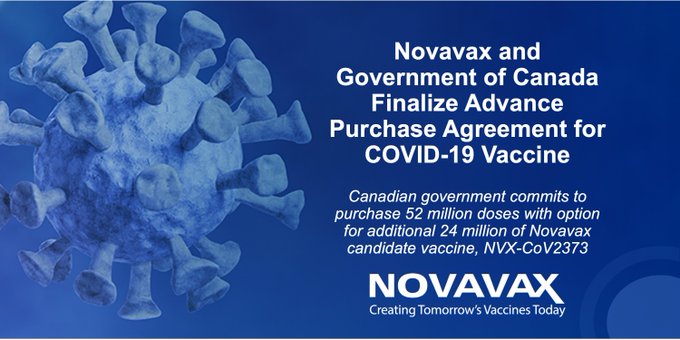 London: Novavax, Inc. (Nasdaq: NVAX), a late-stage biotechnology company developing next-generation vaccines for serious infectious diseases, today announced that it has finalized an agreement with the Government of Canada to supply up to 76 million doses of NVX-CoV2373, the company’s recombinant protein-based COVID-19 vaccine. Canada has committed to purchase 52 million doses of the vaccine with the option for up to an additional 24 million doses. NVX-CoV2373 is currently in Phase 3 clinical development for the prevention of COVID-19.

“We thank the Government of Canada for their confidence in our program and ongoing partnership in the regulatory review and delivery of a safe, effective COVID-19 vaccine for the citizens of Canada,” said John J. Trizzino, Chief Commercial Officer and Chief Business Officer, Novavax. “Novavax is proud to play our part in working tirelessly together with governments, scientists, regulators and others in the global effort to put an end to the pandemic.”

The company expects to supply NVX-CoV2373 to Canada beginning as early as the second quarter of 2021, following authorization by Canada’s regulatory agency.

Novavax is currently conducting three efficacy, safety and immunogenicity studies of NVX-CoV2373 and expects to announce initial efficacy results as early as the first quarter of 2021.

NVX-CoV2373 is a protein-based vaccine candidate engineered from the genetic sequence of SARS-CoV-2, the virus that causes COVID-19 disease. NVX-CoV2373 was created using Novavax’ recombinant nanoparticle technology to generate antigen derived from the coronavirus spike (S) protein and is adjuvanted with Novavax’ patented saponin-based Matrix-M™ to enhance the immune response and stimulate high levels of neutralizing antibodies. NVX-CoV2373 contains purified protein antigen and can neither replicate, nor can it cause COVID-19. In preclinical studies, NVX-CoV2373 induced antibodies that block binding of spike protein to cellular receptors and provided protection from infection and disease. It was generally well-tolerated and elicited robust antibody response numerically superior to that seen in human convalescent sera in Phase 1/2 clinical testing. NVX-CoV2373 is currently being evaluated in two pivotal Phase 3 trials: a trial in the U.K that completed enrollment in November and the PREVENT-19 trial in the U.S. and Mexico that began in December. It is also being tested in two ongoing Phase 2 studies that began in August: A Phase 2b trial in South Africa, and a Phase 1/2 continuation in the U.S. and Australia.