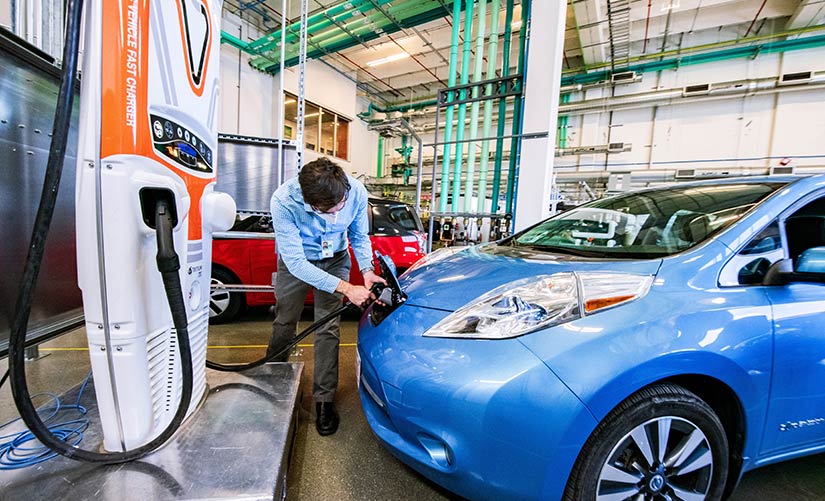 National Renewable Energy Laboratory (NREL) researchers, working alongside partners at the Colorado School of Mines (CSM) and Saint-Gobain Crystals (SGC), may have uncovered the key to improving the energy efficiency and performance of energy-intensive manufacturing, energy generation, transportation, and more.

Image of an electric car inside a laboratory, charging station on the left-hand side of the photo, man is holding a charging line and placing it into a car.
Oxide electronic devices and sensors that can withstand high temperatures have the potential to increase the reliability of engines, batteries, brakes, and other components of both gasoline- and electric-powered cars. Photo by Dennis Schroeder, NREL
Those applications require electronic devices that can operate reliably and efficiently when exposed to high temperatures or otherwise extreme environments. The NREL-led team is working to demonstrate a potential solution—oxide electronic materials and semiconductor devices, such as diodes, transistors and sensors. This work is part of the three-year Oxide Electronic Devices for Extreme Operating Environments project, funded by the U.S. Department of Energy’s Advanced Manufacturing Office, which is convening partners from academia, industry, and the national laboratory system to address the lack of reliable and inexpensive high-temperature electronic devices.

An expansion of NREL’s power electronics work, the findings from this project could lead to low-cost, all-oxide circuit elements that could withstand high temperatures, corrosive atmospheres, and mechanical stresses, with far-reaching implications for many energy-related technologies from geothermal energy extraction, to aluminum alloy manufacturing, to the reliability of tomorrow’s vehicles.

Turning Up the Heat
Electronic devices produced with beta gallium oxide (β-Ga2O3) have the potential to increase the operating temperature and lifespan of semiconductors—without sacrificing performance. Gallium oxide semiconductors have a 4–5 times wider bandgap than components produced with silicon, which can lead to much higher operating temperatures. In addition, recent NREL research indicated that these gallium oxide wafers could cost 3–5 times less than other emerging wide-bandgap semiconductors such as silicon carbide, while enjoying the same technical advantages.

Such properties can significantly improve both energy technologies and manufacturing processes, leading to higher efficiencies, lower costs, and improved reliability, as compared to conventional silicon semiconductors and emerging wide-bandgap semiconductors, such as silicon carbide and gallium nitride.

A 3D approach to protecting biodiversity on the high seas

Researchers analyse paint jets on a bass speaker to answer…

The on-the-ground realities of such innovation carry exciting possibilities for several industries and sectors. In the context of both geothermal energy production and oil and gas extraction, these next-generation electronics could enable higher drilling speeds and lower failure rates. High-temperature electronic sensors can allow for higher operating temperatures of aluminum and steel plants, as well as coal- and gas-fired power plants, which could lead to a higher energy efficiency of these industrial processes. In the context of vehicles, both gasoline-powered and electric cars stand to benefit from such technological advances, as high-temperature-resistant electronic sensors could increase the reliability of engines, batteries, brakes, and other vehicle components.

Employing NREL’s expertise in oxide semiconductor materials and novel electronic devices, combined with SGC’s experience in gallium oxide single-crystal wafer manufacturing and CSM’s proficiency in high-temperature measurements of oxide ionic devices, the project is carrying out a host of activities:

Crystal growth and measurement: Improving manufacturing of gallium oxide single-crystal wafers
Device fabrication and testing: Fabricating oxide semiconductor devices and sensors and evaluating their performance and reliability under extreme conditions
Modeling and simulations: Supporting experimental efforts in manufacturing, materials, and devices, with computational models at different scales.
SGC’s Milford, New Hampshire, facility is carrying out the single-crystal growth; device fabrication is being performed at NREL; and CSM is completing performance and reliability testing of the oxide electronic devices in corrosive conditions. All three institutions are engaged in modeling efforts.

Enlisting Supercomputer Superpowers
NREL brings first-class facilities to the table, which allow for a substantial step up in both experimental and computational capabilities from typical research platforms.

The computational efforts in this project will be powered by NREL’s 8-petaflop supercomputer, Eagle, allowing researchers to simulate processes related to materials manufacturing and device fabrication, down to the level of individual atoms. In a prior team effort, this supercomputer was used to predict dozens of new wide-bandgap semiconductors that could be used in high-power and high-temperature applications, including the gallium oxide used in this project.

From materials science technologies, to device fabrication and validation, to modeling and simulation, the project leverages NREL’s research expertise and top-notch facilities to demonstrate that oxide electronic devices are suitable to withstand high temperatures, corrosive atmospheres, and mechanical stresses.

A 3D approach to protecting biodiversity on the high seas