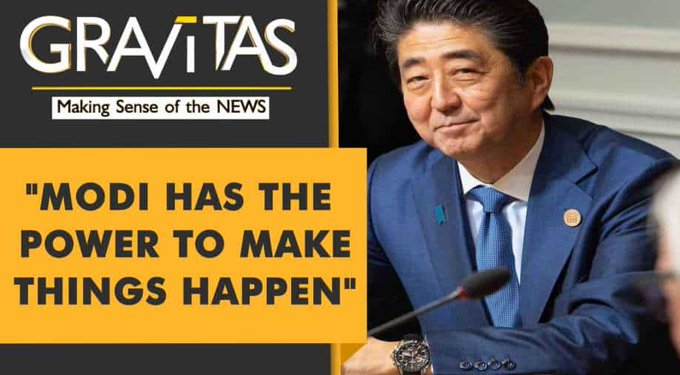 Abe said “This is a comment given directly by President Biden. And he talked about the US’s commitment to defend Taiwan. Even though the White House came out and denied it – saying that it is the same policy. But I think essentially what President Biden had said was the truth and it was a message to China.”

He further added “On the very point that the White House came right out saying our policy has not changed – the fact that they clarified that right after President Biden’s comment gives us a signal that the US is starting to look at changing the policy.”

Abe stated that the White House’s clarification was probably meant to downplay the significant policy change. “If the US were in a position to intervene, then China may have to give up its idea of annexing Taiwan”, said Abe. He added that if China cannot militarily defeat Taiwan, it will try to destabilise the island’s economy and politics.

The statement comes in the background of the Quad Summit being held in Japan. The Quad or the Quadrilateral Security Dialogue is a group made of four nations, India, Japan, the US, and Australia. It is a strategic forum that features semi-regular summits, information exchange, and military drills.

On being questioned about the possibility of Japan hosting US’ nuclear missiles, Abe responded in the affirmative. “Nuclear deterrence will safeguard Japan’s interests”, said Abe.

The former prime minister also spoke about his long association with India’s Prime Minister Narendra Modi, calling him “a quick decision-maker, and a leader who gets things done.” He focused on Japan’s relationship with India which is older than its relationship with the USA. He concluded the conversation reiterating that the partnership with India is that of “maximum potential.”

iednewsdesk May 27, 2022
Incredible performances at the 2022 Australian Swimming Championships have secured places for 18 Griffith…

University of Western Australia: A tale of carbon’s travels…